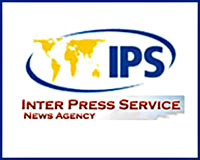 In the interview titled "Q&A: 'Closer Now to a Nuke-Free World,'" Mr. Ikeda affirms that "the real 'enemy' is not nuclear weapons, nor the states that would possess or develop them," but "the way of thinking that justifies nuclear weapons." He urges civil society "to come together to create a popular groundswell for nuclear abolition," embracing a vision of the possibility of that goal. [Read the full interview on the Inter Press site]