Celebrating May 3 and a History of Struggle for People's Happiness 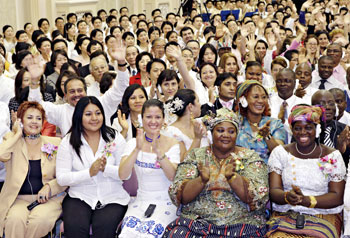 Speaking at the monthly Soka Gakkai leaders meeting on April 17, 2010, Daisaku Ikeda, SGI president, declared that the three generations of Soka mentors and disciples "have overcome every obstacle and adversity," and that he wished to proudly proclaim the organization's "resounding victory." The gathering, held at the Makiguchi Memorial Hall in Hachioji, Tokyo, commemorated May 3, Soka Gakkai Day, and the 50th anniversary of SGI President Ikeda's inauguration as third Soka Gakkai president. It also commemorated the 80th anniversary year of the Soka Gakkai's founding. The meeting was attended by SGI members from 24 countries and territories as well as Soka Gakkai representatives from around Japan.

In commemoration of the May 3 anniversary, Mr. Ikeda showed to the participants a calligraphic work he inscribed on May 3, 1980, which recorded a number of historic May 3 landmarks in the organization's history. Mr. Ikeda also recalled his first meeting with his mentor, second Soka Gakkai president Josei Toda, in 1947 at the age of 19. He shared a poem titled "Ablaze with Hope," which he penned shortly after this encounter, expressing his firm determination to walk his chosen path with fortitude and vigor and endure any hardship.

Quoting words of the American poet Walt Whitman (1819–92), "Everything comes out of the people, the everyday people," Mr. Ikeda affirmed that "the people are the most admirable of all." The Soka Gakkai, he said, "was born among the people, is rooted in the people, and works for the happiness and welfare of the people." The people, he stated, "embody the best of humanity," and are a nation's genuine treasure. "When we look at history," Mr. Ikeda continued, "we see how much the people have suffered at the hands of foolish and corrupt leaders. In the worst instances, this has taken the form of the terrible tragedy of war." He said that it was out of a wish that such misery never again be inflicted on the people that the Soka Gakkai's first and second presidents, Tsunesaburo Makiguchi and Josei Toda, risked their lives to establish the Soka Gakkai movement amidst Japan's burgeoning militarism. "The voices of the people who desire peace reflect what is true and just . . . The real worth of leaders is judged not by their grandiose pronouncements but by what they actually do for the welfare and happiness of the people. Each individual needs to become wiser and more insightful. To build a better world, we must each learn to see through hypocrisy and deception."

Mr. Ikeda also shared words of the American philosopher and essayist Ralph Waldo Emerson (1803-82) and reported on the dialogue he is currently conducting with Dr. Sarah Wider, professor of English and Women's Studies at Colgate University in the United States and former president of the Ralph Waldo Emerson Society. Quoting Emerson's words, "What a new face courage puts on everything! A determined man, by his very attitude, and the tone of his voice, puts a stop to defeat, and begins to conquer," the SGI President stated that "faith means being courageous," and "courage is key to realizing justice . . . a courageous voice spreads goodness."

Reporting that 150,000 people throughout Japan had been newly appointed as professors of the Soka Gakkai's Study Department, Mr. Ikeda shared his conviction that "a person's true greatness lies with what they cherish in their heart," and that those who cherish the philosophy of Nichiren Buddhism reveal their inner nobility and are able to "bring forth limitless wisdom and power" to triumph in life's challenges.

May 3 is also Soka Gakkai Mother's Day. Commenting on this, Mr. Ikeda declared that the development of the SGI owes "everything" to the efforts of women. Male leaders in particular, he said, should never forget that the women are the foundation of the organization. "Organizations that demean or disrespect women will not be able to continue flourishing. This harsh reality will only become increasingly apparent in the future," he stated.