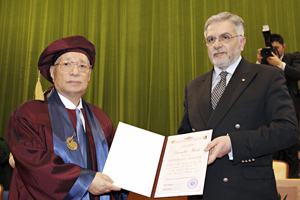 On April 2, 2010, Yerevan State Academy of Fine Arts, Armenia, presented an honorary doctorate to Daisaku Ikeda, SGI president, following the entrance ceremony for incoming Soka University and Soka Women's College students at Soka University's Central Auditorium in Hachioji, Tokyo. During the event, Mr. Ikeda was also appointed honorary member of the Artists' Union of Armenia. The honors recognize Mr. Ikeda for his dedication and contributions to peacebuilding and to cultural development and exchange on a global scale. Academy Rector Aram Issabekian and Union President Karen G. Aghamyan traveled to Japan to present the respective certificates to Mr. Ikeda.

The Yerevan Academy of Fine Arts was founded in 1945 and has a number of eminent national artists among its instructors in mediums including painting, sculpture, graphic design and industrial design. The Artists' Union of Armenia, established in 1932, supports the activities of young artists on the international stage and has a membership of around 1,100 artists. Both Rector Issabekian and President Aghamyan are prominent artists in their own right. 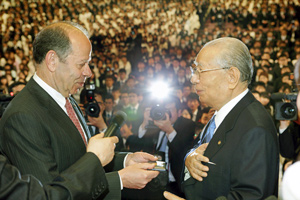 In his conferral speech, Rector Issabekian stated that Mr. Ikeda's wide-ranging activities in such fields as the arts, scholarship and philosophy demonstrate that the SGI leader is a passionate champion of lofty ideals, and that this passion finds consonance in the spirit of the Armenian people whose history spans 5,000 years. He expressed his hope that the young artists studying at Yerevan Academy would receive inspiration from Mr. Ikeda's way of life and strive to uphold the sanctity of human life. In his speech, President Aghamyan remarked that his encounter with Mr. Ikeda has been a transformative experience which has deeply impacted his life. He asserted that welcoming Mr. Ikeda as an honorary member of the Artists' Union of Armenia will serve to further open new avenues of cultural exchanges between Armenia and Japan.

In his acceptance speech, Mr. Ikeda thanked both institutions for the honors bestowed upon him. Quoting from historic figures of Armenia and the world of art, he also shared the words of the famous Armenian musician Aram Kachaturian who appealed to the youth, "Just as iron is apt to rust, indolence causes human creativity to corrode." Mr. Ikeda urged the young people not to lead a rootless way of life swept up in superficial pleasures and instead challenge adversities, dauntlessly forging ahead one step at a time, so as to have no regrets in life.

Also present at the conferral was a contingent from the Federation of National Writers Associations of Malaysia (GAPENA), headed by its president, Tan Sri Prof. Emeritus Dato' Dr. Haji Ismail B. Hussein. On the previous day, Mr. Ikeda had been presented the World's Great Poet Award from GAPENA in proxy.

[Adapted from an article in the April 3, 2010, issue of the Seikyo Shimbun, Soka Gakkai, Japan]