On April 5, 2010, Sichuan Academy of Social Sciences, China, named Daisaku Ikeda an honorary professor. The Soka University founder and SGI president was recognized for his contributions to Sino-Japanese friendship at a conferral that took place by proxy at Soka University in Hachioji, Tokyo. Professor Hou Shuiping, president of the Chinese academy, entrusted the certificate to Soka University President Hideo Yamamoto, and a Chinese poem composed by Mr. Ikeda as a gesture of friendship was presented to the academy.

Since its founding in 1978, Sichuan Academy of Social Sciences has gained renown as one of China's leading comprehensive social science research institutions. It has 15 affiliated institutes undertaking research in various fields including economics, sociology, philosophy and information science.

In the citation, Professor Hou commented that actively promoting exchanges and learning from diverse cultures help create new cultural norms. He commended Soka University for being one of the first Japanese universities to establish a formal academic relationship with Peking University and the first to open its doors to Chinese students. Soka University today has formal academic ties with some 30 Chinese institutions of higher learning. He stated that Mr. Ikeda has made significant contributions to improving Sino-Japanese friendship over many years, and that it is for this reason that he has been named an honorary professor and welcomed as a member of the faculty.

In a message read by Soka Women's College President Hideaki Ishii, Mr. Ikeda expressed his heartfelt appreciation for the honor, which he dedicated to his mentor, second Soka Gakkai president Josei Toda. Mr. Ikeda commended the academy for its ideals of protecting the interests of the people and implementing their opinions and said he would strive to further contribute to peace and human security as well as to enduring Sino-Japanese friendship as the latest member of Sichuan Academy of Social Sciences. 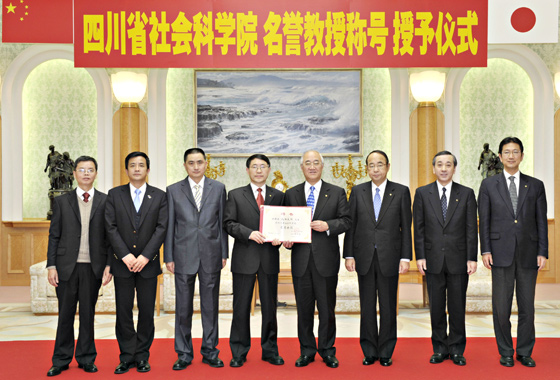 [Adapted from an article in the April 6, 2010, issue of the Seikyo Shimbun, Soka Gakkai, Japan]