A Youthful Diary Published in Taiwan 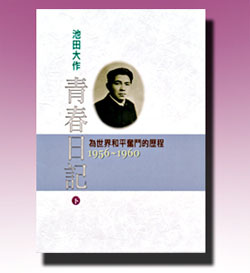 TAIPEI, Taiwan: Chen Yin Culture Enterprise recently published the second of a two-volume, traditional Chinese edition of A Youthful Diary. The work, a private diary which Daisaku Ikeda began at the age of 21, not only records his aspirations and frustrations in facing the challenges of life, work, family, faith and friends between 1949 and 1960, but also details the insights that would shape the international development of the Soka Gakkai. This latest traditional Chinese volume begins in1956 and ends in 1960, shortly after Mr. Ikeda became the third president of the Soka Gakkai lay Buddhist organization.

[Adapted from an article in the April 7, 2010, issue of the Seikyo Shimbun, Soka Gakkai, Japan]