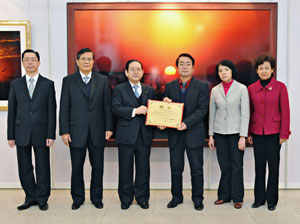 On April 15, 2010, Guangxi Arts Institute in Nanning, Guangxi Zhuang Autonomous Region conferred a honorary lifetime professorship upon Daisaku Ikeda, SGI president, in recognition of his dedication to cultural and educational exchange. The conferral, conducted by proxy, took place during the opening of "Dialogue with Nature," an exhibition of photographs taken by Mr. Ikeda in Japan and abroad, being shown at the institution.

The Guangxi Zhuang Autonomous Region is situated in southern China and is home to some 50 million people and 40 ethnic groups.

Guangxi Arts Institute was founded in 1938 as a teacher training institute by a group of musicians and artists that include Xu Beihong, a trailblazer in contemporary Chinese art. It began providing art and cultural education in 1960. It is one of six provincial comprehensive art institutions of higher learning in China, and the only one in the region authorized to confer master's degrees. Currently, 7,200 students are enrolled in its eight colleges.

President Huang Gesheng, a renowned Chinese painter in his own right, remarked that Mr. Ikeda's educational ideals aimed at fostering individuals dedicated to the well-being of others and society are in consonance with the ideals of Guangxi Arts Institute. He entrusted the certificate of appointment to SGI-Hong Kong Honorary General Director Lee Kong-sau, who accepted it on Mr. Ikeda's behalf.

During the ceremony, a Chinese poem composed by Mr. Ikeda as a gesture of his appreciation was presented to Professor Huang, who entrusted Mr. Lee with a calligraphic work he had rendered for Mr. Ikeda to commemorate the occasion.

In a message, Mr. Ikeda began by extending his deepest condolences to those affected by the severe drought conditions in parts of southern, southwestern, and central China, including the Guangxi Zhuang Autonomous Region. Reminiscing on his friendship with the late Deng Yingchao, wife of Premier Zhou-Enlai, who hailed from Nanning, Mr. Ikeda remarked that Madame Deng had great pride in Guangxi as the birthplace of numerous heroic figures. He expressed his appreciation for the accolade and for the Institute's hosting of "Dialogue with Nature," and expressed his resolve to work together with the faculty and students to further exchanges of peace, culture and education among the people of the world.

[Adapted from an article in the April 17, 2010, issue of the Seikyo Shimbun, Soka Gakkai, Japan]