Xinjiang Medical University (XMU) of the Xinjiang Uyghur Autonomous Region, China, presented Daisaku Ikeda, Soka University founder, with its first honorary professorship in recognition of his contributions to Sino-Japanese friendship and his longstanding work for world peace. The conferral took place by proxy on April 15, 2010, at the Soka University Central Tower in Hachioji, Tokyo. Professor Li Bin, chairman of the XMU University Council, entrusted the certificate to Soka University President Hideo Yamamoto, and a Chinese poem composed by Mr. Ikeda as a gesture of friendship was presented to Professor Li and his party.

XMU is located in Urumqi, the capital of the Xinjiang Uyghur Autonomous Region in northwest China, a strategic stopover along the ancient Silk Road (a thoroughfare for exchanges between peoples and cultures that also played an important role in the spread of Buddhism). XMU is a comprehensive medical university with a special program combining traditional Uyghur medicine, Western medicine and Chinese medicine. It enrolls some 19,000 students and has affiliations with six hospitals, providing cutting-edge medical technology to the community. 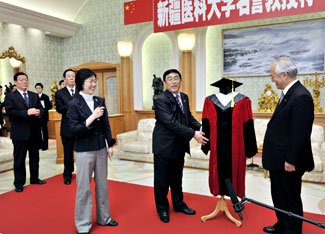 Cap and gown of Xinjiang Medical University was also presented to Mr. Ikeda

Explaining the university's decision to make Mr. Ikeda its first honorary professor, Professor Li stated that the process began with the awareness that those who aim to engage in medicine must fundamentally cultivate their character while striving to acquire specialized knowledge and skill. XMU determined that Mr. Ikeda's philosophy and actions for peace, culture and education, and especially his promotion of the dignity of life, offer a reliable guidepost for fostering positive values. Since medicine is for the sake of humankind in every regard, Professor Li affirmed, it requires love and compassion to sustain it, and XMU aspires to learn and teach this spirit.

In a message sent to the conferral, Mr. Ikeda began by expressing his heartfelt condolences to the victims of the earthquake that hit Qinghai Province on April 14, 2010, and his hopes for the earliest revival of the area. He thanked Xinjiang Medical University for the academic honor, saying the Chinese institution embodied the spirit of Sun Simiao (581-682), a renowned physician of the Tang Dynasty, who stated that "a great doctor must be an individual of great integrity." Quoting the famous Chinese poet Ai Qing (1910-96), Mr. Ikeda said he hoped to work together with university professors and staff to create a century of light in which the dignity of life and the triumph of the humanity is celebrated.

[Adapted from an article in the April 16, 2010, issue of the Seikyo Shimbun, Soka Gakkai, Japan]