Italian Edition of Life: An Enigma Reissued in Paperback 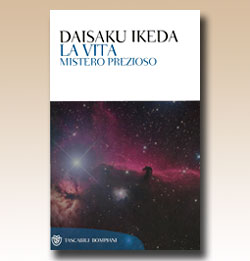 MILAN, Italy: Publisher Bompiani has reissued an Italian edition of Life: An Enigma, a Precious Jewel in paperback. The work, as author Daisaku Ikeda himself explains, examines "ways in which Buddhist truth may be illustrated in modern scientific terms." It was first released in Italy in 1991 in both hardback and paperback and sold more than 60,000 copies.

In comparing various views of the human being in its totality, Life: An Enigma draws on a wide range of literature, from naturalist Charles Darwin and philosopher Immanuel Kant to poet Walt Whitman and historian Arnold Toynbee. The work was originally published in Japanese in 1982 and has since been translated into Spanish, French, Indonesian, Swahili, German, Danish, Serbian and Macedonian, to date.

[Adapted from an article in the April 20, 2010, issue of the Seikyo Shimbun, Soka Gakkai, Japan]