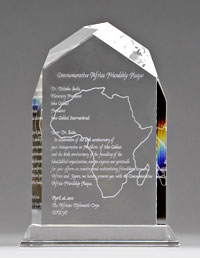 Representatives of 21 nations from the African Diplomatic Corps in Japan presented Daisaku Ikeda with its Commemorative African Friendship Plaque in appreciation for his longstanding promotion of amity and goodwill between Africa and Japan through dialogue, cultural exchange and educational initiatives. The presentation ceremony took place at the Soka International Friendship Hall in Tokyo on April 26, 2010.

Speaking on behalf of his colleagues, His Excellency Ambassador Gabriel Alexandre Sar, Republic of Senegal's Ambassador to Japan, extended his congratulations to Mr. Ikeda on the 50th anniversary of his inauguration as president of the Soka Gakkai as well as for the 80th anniversary of the organization's founding to be celebrated later this year. Fully endorsing the SGI president's belief that "world peace can only be realized by transcending political, religious, ethnic and cultural differences by emphasizing dialogue," the ambassador concluded that "Mr. Ikeda's efforts to enhance the quality of education and promote cultural exchange with the nations of Africa have proved to be an incalculable service."

Mr. Ikeda heartily thanked the Corps for the citation, which he said he accepted on behalf of his mentor and second President Josei Toda as well as SGI members throughout the world.

Prior to the ceremony, Mr. Ikeda held discussions with the African diplomats. He noted that it has been 50 years since many African nations gained independence from colonial rule. He remarked at the remarkable advances Africa has made in recent years, calling attention to an International Monetary Fund report identifying 20 of the world's fastest developing countries, among which eight are African nations. He also spoke highly of the African Nuclear Weapon Free Zone Treaty last year, making it the largest of its kind in the world. Referring to the relatively high percentage of youth of the African continent, Mr. Ikeda expressed his expectations for Africa to take the lead in the UN International Year of Youth 2010.

The African Diplomatic Corps of Japan has presented Mr. Ikeda with citations in 1991 and 2007 in recognition of his contributions to the advancement of peace, culture and education.

In addition, Mr. Ikeda has been recognized by the Writers' Association of Kenya and engaged in dialogues with many notable African cultural and political leaders, including Kenyan environmental activist Dr. Wangari Maathai, Nigerian writer Wole Soyinka and former South African President Nelson Mandela. He is also the recipient of academic honors from South Africa's University of the North (1995), the University of Ghana (1996), and Kenya's Kenyatta University (2002).

[Adapted from an article in the April 27, 2010, issue of the Seikyo Shimbun, Soka Gakkai, Japan]