On August 2, 2010, University of Malaya (UM) in Kuala Lumpur, Malaysia, presented an honorary doctorate of humanities to Daisaku Ikeda, SGI president, by proxy, during the university's 40th convocation held at Tunku Chancellor Hall. Mr. Ikeda was recognized for his dedicated efforts to connect people through the advancement of culture, and for his contributions to building a world of peace and happiness. His Royal Highness Sultan Azlan Shah, the Sultan of Perak and UM chancellor, entrusted the certificate to SGI Vice President Hiromasa Ikeda, who participated in the ceremony on his father's behalf.

Tan Sri Prof. Emeritus Ismail Hussein, president of The Federation of National Writer Associations of Malaysia (GAPENA), gave a congratulatory speech. GAPENA presented Mr. Ikeda with the World's Great Poet Award earlier this year and in 2008 published a Malay edition of a compilation of 30 essays written by Mr. Ikeda.

In a citation, Vice-Chancellor Ghauth commended Mr. Ikeda for his promotion of cultural exchanges and his conviction that they lead to developing friendship and mutual understanding, as well as being the most potent force for peacebuilding. He remarked that through the founding of the Tokyo Fuji Art Museum and the Min-On Concert Association, Mr. Ikeda has fostered alliances between Japan and countries throughout the world including Malaysia.

In closing, referring to the concept of "human revolution," which he said is the core ideal upheld by Mr. Ikeda, Dr. Ghauth stated his belief that the world's thinkers concur that people themselves must positively reform their lives if they are to transform society and ensure humanity's flourishing and security. The SGI leader, through his actions and philosophy based on this concept, has influenced countless people throughout the world, Dr. Ghauth affirmed, and quoted from Mr. Ikeda's historical novel, The Human Revolution: "A great human revolution in just a single individual will help achieve a change in the destiny of a nation and, further, will enable a change in the destiny of all humankind."

In an acceptance message read at the event, Mr. Ikeda conveyed his appreciation and pride in the privilege of joining the University of Malaya community. Reminiscing on Sultan Azlan Shah's visit to Japan in April 1993, he recalled that His Royal Highness, who embraces a personal philosophy that genuine wisdom is to be found in diversity, had expressed that the hope for humanity lay in fostering and strengthening the spirit of compassion, the ability to extend genuine care and concern for the lives of others with profound respect for their dignity at all times. Mr. Ikeda said he had been deeply struck by the truth of this statement and strongly believes "the key to building a peaceful and humane global society in the twenty-first century lies in developing our ability to respect diversity and learn from different values and cultures."

University of Malaya is Malaysia's oldest university. It was originally established in Singapore in April 1949, with its roots in the King Edward VII College of Medicine founded in 1905 and Raffles College founded in 1928. It was established as a national university in Kuala Lumpur, Malaysia, on January 1, 1962. Today, some 25,000 students study on the sprawling 3.3 million meters square campus in 12 faculties, including medicine, law, education and engineering. The Malaysian university has educational exchanges with Oxford and Cambridge universities in the UK, University of California, Irvine, in the U.S. and Peking University in China. 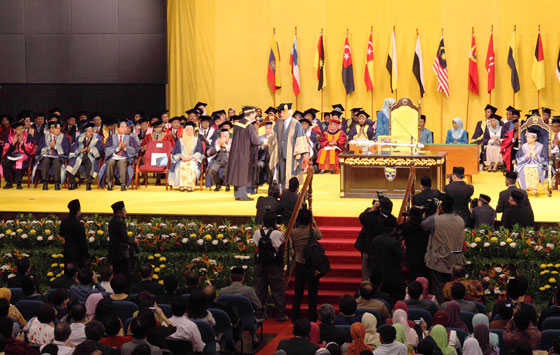 The conferral ceremony for the honorary doctorate of humanities for the SGI president was held at University of Malaya with his son Hiromasa Ikeda attending in proxy.

[Adapted from an article in the August 4, 2010, issue of the Seikyo Shimbun, Soka Gakkai, Japan]