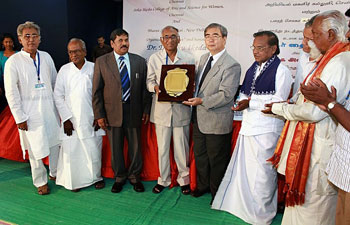 On August 7, 2010, the World Poetry Society Intercontinental (WPSI), based in Chennai, India, dedicated a special "Poets Meet" to Daisaku Ikeda, SGI president, commemorating the 50th anniversary of his inauguration as Soka Gakkai president in 1960 and in appreciation of his work that has inspired hope and courage in people across the globe. WPSI President A. Padmanaban and Madras High Court Justice S. Tamilvanam were the chief guests. During the event, 61 poets took the rostrum to pay tribute to Mr. Ikeda through their poetry.

With affiliates in 50 countries, WPSI was founded by the late Dr. Krishna Srinivas, who was also cofounder of the World Congress of Poets and founding president of the WPSI monthly magazine Poetry World (formerly Poet). Over the years, Poetry World has continued to feature Mr. Ikeda's poetry on its cover. In 1995, the society conferred the World Poet Laureate Award upon Mr. Ikeda. The SGI president was also declared a poet laureate by the World Academy of Arts and Culture in 1981.

WPSI President Padmanaban presented the "World Peace Poet Award" to BSG Vice Chair Akash Ouchi. who accepted it on Mr. Ikeda's behalf. In his conferral speech, the WPSI leader remarked, "As a poet and a proponent for peace, Dr. Ikeda is one of the great men of modern times. Great minds inspire the world as do great writings. In recognition of his outstanding achievements, particularly in espousing peace among people and nations, we, the World Poetry Society Intercontinental have great pleasure in honoring Dr. Ikeda with the 'World Peace Poet Award.'"

In an acceptance message read by proxy, Mr. Ikeda expressed his deep appreciation for being named "World Peace Poet" by WPSI and reaffirmed his vow to "working without cease for the cause of world peace . . . so long as the flame of life burns within me."

Sharing words from spiritual leaders such as Mahatma Gandhi, Rabindranath Tagore and Dr. Padmanaban who referred to the human spirit, or the heart, as the driving force for peace, Mr. Ikeda concluded:

Poet!
Heroes whose hearts
are surmounted with
jewelled crowns,
freely spread your wings as you attend to the deep inner
reverberations of the
mystic rhythms of the cosmos.
Enable humankind to
leap from the depths
of suspicion, hatred and conflict,
into the high skies of peace!

We will never
put down our pen.
We will never
restrain our voices.
Until this world is filled
with the blossoms of happiness.

Continue to sing
the songs of your soul
until the last ember
of life burns and glows.

[Adapted from an article in the August 14, 2010, issue of the Seikyo Shimbun, Soka Gakkai, Japan]