Daisaku Ikeda, SGI president, was recently honored with honorary professorships from two universities from the city of Osh in Kyrgyzstan in recognition of his longstanding contributions to the development of human values. The conferrals were made by proxy at the central auditorium of Soka University in Hachioji, Tokyo, on August 17, 2010, following an annual festival sponsored by Soka University correspondence course students. At the conferral, Osh Humanitarian Pedagogical Institute Rector Kanybek Abduvasitovich Isakov and Osh Agricultural Institute Rector Seitbek Yusupovich Amatov each entrusted Soka University President Hideo Yamamoto with a certificate of appointment for Mr. Ikeda. Located in southern Kyrgyzstan, the 3,000-year-old city of Osh is the country’s second largest metropolis and is among the oldest settlements in Central Asia. Osh is home to numerous institutions of higher learning, and students make up a quarter of its population. With its 85-year tradition, Osh Humanitarian Pedagogical Institute serves as the hub for this “city of learning.” Rector Isakov has supported student government and club activities with respect for their independence. A relatively new institution, Osh Agricultural Institute, established in 2003, aims to foster future experts in agriculture and animal husbandry, both industries for which Kyrgyzstan is famous. Rector Amatov, a graduate of Osh State University, was instrumental in the founding of this younger institute and was inducted as its rector in 2004.

Prior to the conferrals, congratulatory remarks were given by Professor Bektemir Murzubraimov, former rector of Osh State University and regarded by Professors Isakov and Amatov as their mentor. He began by commending the correspondence students for their arduous efforts to balance their studies with their jobs and other responsibilities. Citing an ancient maxim--“For as long as one lives, one must continue to learn!”--Professor Murzubraimov stated that Mr. Ikeda has validated these words through his life-long challenge to cultivate himself and share this spirit of self-development with others, as well as through his efforts to engage in dialogue with like-minded individuals. When each person continues to make efforts without losing sight of oneself, he said, creating peace is possible.

During the citations, Rector Isakov remarked that Mr. Ikeda is a great example of someone who has been intently searching for resolutions to problems facing humanity through dialogues with renowned thinkers, such as with the late Kyrgyz author Chingiz Aitmatov (1928-2008), with whom he discussed environmental and other issues. Rector Amatov commended Mr. Ikeda for deepening ties between Kyrgyzstan and Japan, and expressed his hopes that the friendship between the two countries would develop further.

In an acceptance message read by proxy, Mr. Ikeda praised Rectors Isakov and Amatov for their dedication to fostering students into capable future leaders. He expressed his commitment to working with the faculty of the two Osh universities to pave a new “silk road of peace and prosperity” for advancing further exchanges among youth from Kyrgyzstan, Japan and around the world. 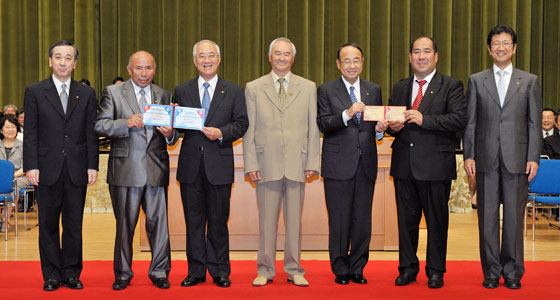 [Adapted from an article in the August 18, 2010, issue of the Seikyo Shimbun, Soka Gakkai, Japan]