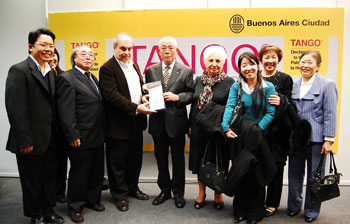 Buenos Aires, the capital of Argentina, presented Daisaku Ikeda, SGI president, with a medal commemorating Argentina's bicentennial in appreciation for his longstanding contributions to friendship between Argentina and Japan through cultural exchange. The conferral was made by proxy on August 26, 2010, at the main venue for "2010 Tango Buenos Aires," an international tango festival and competition. The National Tango Academy also presented Mr. Ikeda with a certificate of appreciation at the same occasion. Lidia Elman de Pugliese, wife of the late tango Maestro Osvaldo Pugliese (1905-95) who had shared friendly exchanges with Mr. Ikeda, was among the dignitaries attending the ceremony.

The city of Buenos Aires had specially commissioned a medal to commemorate the nation's 200th anniversary, and 200 reproductions were created to honor individuals from various sectors of society. Mr. Ikeda was chosen as the only foreign recipient for his efforts as the founder of the Min-On Concert Association to introduce to Japanese audiences the authentic art of tango and tango artists who encapsulate its spirit.

In the citation, Buenos Aires Culture Minister Hernán Lombardi described Mr. Ikeda as an individual who has greatly contributed to the promotion and flourishing of Buenos Aires's cultural heritage. Min-On President Hiroyasu Kobayashi, who accepted the award on Mr. Ikeda's behalf, read a message from Mr. Ikeda expressing his admiration for tango as a paean to human life bursting with the passion and energy of the Argentine people. Mr. Ikeda referred to Maestro Pugliese's belief that when an individual overflowing with love and fellowship dedicates oneself to creating something one is able to transcend any and all boundaries, and expressed his commitment to upholding this same spirit of humanism and paving a path of peace and creativity that connects the hearts of youth throughout the world.

[Adapted from an article in the September 12, 2010, issue of the Seikyo Shimbun, Soka Gakkai, Japan]