On December 1, 2010, Dalian Maritime University (DMU) in China presented Daisaku Ikeda, founder of Soka University, with an honorary professorship in recognition of his efforts to promote friendly relations between Japan and China, as well as his contributions to fostering youth. At the ceremony, which was held at Soka University in Hachioji, Tokyo, Soka University President Hideo Yamamoto received the honorary certificate on Mr. Ikeda's behalf.

Located in the coastal city of Dalian in Liaoning Province, DMU is one of the largest maritime universities in China and is recognized by the International Maritime Organization (IMO) as an excellent institution of maritime education and training. The university, which celebrated its centennial in 2009, has produced some 60,000 graduates, contributing to a global pool of expertise in the fields of navigation and marine engineering.

Vice President and Director of the University Affairs Committee Wang Zhaohe commended Mr. Ikeda for his establishment of a comprehensive Soka education system founded on the educational philosophy of his predecessor, educator and first Soka Gakkai President Tsunesaburo Makiguchi, whose pedagogy focuses on children's happiness and character-building through the creation of value. He cited the Soka University founder for his wide-reaching influence in various sectors of society and for fostering many talented youth through Soka University who are contributing to peace and Sino-Japanese friendship. These include the first Chinese exchange students to study in Japan following the normalization of Sino-Japanese diplomatic relations. The director expressed his hope to tap Mr. Ikeda's fount of original wisdom and creativity through future exchanges and collaborations.

In his message, read by proxy, Mr. Ikeda discussed the Chinese concept of tongchuan gongji, which can be translated as, "when on a common boat, cross the river peacefully together," 'emphasizing the importance of cooperation for overcoming common problems. He praised the school motto, "Accumulate wisdom as abundant as a hundred rivers and virtue deep enough to fill the four seas," which suggests, he said, that in addition to study, what is most important is polishing one's character to become a person who can contribute to the well-being of all people. Expressing his own resolve to faithfully uphold this spirit, Mr. Ikeda said he hoped, together with the faculty members of the university, to pave the way for further exchanges among youth of both countries and the world. 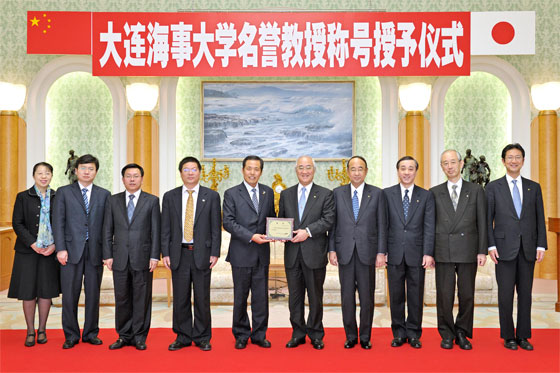 [Adapted from an article in the December 2, 2010, issue of the Seikyo Shimbun, Soka Gakkai, Japan]