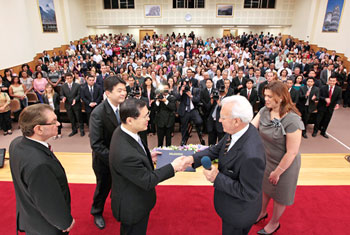 Mr. Hiromasa Ikeda (foreground, 2nd from left) receives the certificate of appointment on behalf of his father from the vice rector

São Paulo Metropolitan University, Brazil, has appointed Daisaku Ikeda, Soka University founder, as its first nonresident honorary professor, recognizing his advocacy of social justice and peaceful ideals, as well as his efforts to promote mutual understanding and harmony among people. The conferral took place by proxy on December 2, 2010, at the SGI-Brazil (BSGI) Ikeda Culture Center in São Paulo.

Founded in 1965, São Paulo Metropolitan University, located in the suburban city of Guarulhos, enrolls some 5,000 students in 13 departments. The university's guiding principle is to foster individuals of sound judgment and acumen.

In a citation, University Legal Affairs Aide José Fernando Rocha stated that Mr. Ikeda, whom he described as an extraordinary peace activist comparable to Mahatma Gandhi and Martin Luther King Jr., has continued to dedicate himself to realizing a world free of armed conflict and other human misery, in which the dignity of all people is absolutely respected. Mr. Ikeda's belief in the promise and potential of youth has inspired and encouraged countless young people, said Professor Rocha.

A conferral speech from University President Antônio Darci Pannocchia read by proxy referred to Mr. Ikeda's 1993 appointment as a non-resident member of the Brazilian Academy of Letters and his acceptance address that continues to have far-reaching influence in Brazilian literary circles. The university president described Mr. Ikeda's annual peace proposals as setting forth enlightened guidelines for creating a peaceful world founded on respect for the sanctity of life and proposing achievable goals that promote the global flourishing of culture and education.

In an acceptance message read by SGI Vice President Hiromasa Ikeda, who accepted the honor on his father's behalf, Mr. Ikeda stated that the Brazilian university's ideals resonate profoundly with the ideals set forth by Tsunesaburo Makiguchi, Soka education founder and first Soka Gakkai president. Mr. Makiguchi believed the aim of education to be to help students develop the ability to create value not only for their own happiness but for the happiness of society as a whole. Further, Mr. Ikeda concurred with the ideals of Brazilian educator Paulo Freire (1921-97), saying that education is the noblest of undertakings that propel the world, people and communities toward progress and prosperity. He concluded his message vowing to fulfill his responsibility as a member of the university's faculty by working even harder to widely promote education.

[Adapted from an article in the December 9, 2010, issue of the Seikyo Shimbun, Soka Gakkai, Japan]