The Federal University of Mato Grosso, Brazil, recently presented an honorary doctorate to Daisaku Ikeda, Soka University founder and SGI president. The ceremony took place on the university's 40th anniversary on December 10, 2010, at the institute's Cuiabá City campus. Mr. Ikeda, who is the first non-native recipient, was honored together with two others--former Matto Grosso Governor Pedro Pedrossian, who was instrumental in the university's founding, and Professor Benedito Figueiredo, a longstanding instructor at the institute. SGI-Brazil General Director Julio Kosaka accepted the accolade from Rector Maria Lúcia Cavalli Neder on behalf of Mr. Ikeda.

In a conferral speech, Rector Neder stated that the honorary academic degree from the Federal University of Mato Grosso is a distinction presented to those individuals who are deemed to be outstanding in the field of academia or the arts, or who are highly respected by the populace. Presenting the award to Mr. Ikeda in a contemporary age that sets great store on the spirit of tolerance and embracing diversity, she remarked, is a noble cause for the cultivation of peace and the flourishing of culture.

In a message for the event, Mr. Ikeda conveyed his deep appreciation for the honor, which he said he shared with fellow SGI members in Brazil. He concurred with Rector Neder that the university has the mission of networking with organizations in various social sectors toward building a better society as a social institution closely linked to the daily lives of the people. Commending Rector Neder for her mentorship of students into astute individuals who are sensitive to global currents and have keen decision-making abilities, Mr. Ikeda expressed his hope to open a path, together with the youth, toward a new spiritual revolution based on the realization that all activity serves the purpose of cultivating humanity's happiness and respect for the sanctity of life.

Besides Cuiabá City, the Federal University of Mato Grosso has three other campuses in Mato Grosso State. Some 22,000 undergraduates and 4,000 graduate students study in its 35 departments, beginning with business, agriculture, medicine, veterinary medicine and forest engineering. During the past 40 years since its establishment, the university has strengthened international ties by entering into academic exchange agreements with 50 universities in 17 countries overseas. 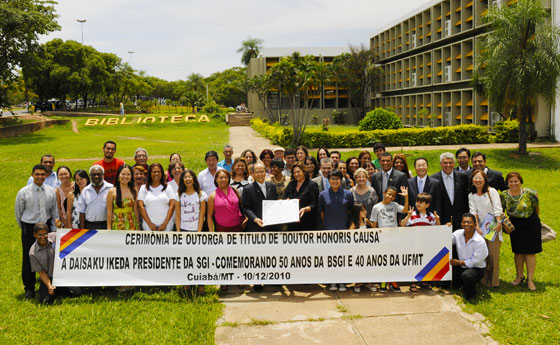 [Adapted from an article in the December 17, 2010, issue of the Seikyo Shimbun, Soka Gakkai, Japan]