On December 22, 2010, the National Formosa University (NFU) in Taiwan presented an honorary doctorate to Daisaku Ikeda, SGI president and Soka University founder, for his longstanding commitment to the flourishing of global peace, culture, education and people's welfare. The conferral took place by proxy at the Soka University Central Tower in Hachioji, Tokyo. NFU President Jenn-Der Lin entrusted the honorary doctorate and university robe to Soka University President Hideo Yamamoto, who accepted them on Mr. Ikeda's behalf. A poem composed by Mr. Ikeda in Chinese characters was presented to the delegation.

NFU, located in Yunlin County, Taiwan, commemorated its 30th anniversary in 2010. Currently, some 10,000 students study in its four colleges--engineering, electrical and computer engineering, management, and applied arts and sciences. Since its establishment in 1980 as Taiwan's first institute of higher learning dedicated to engineering technology, NFU has consistently been named among the top three technological universities in Taiwan.

In the citation, President Lin lauded Mr. Ikeda for his enduring contributions to furthering global peace and mutual understanding among the international community, and advancing culture and education through the establishment of a comprehensive educational system from kindergarten through university as well as peace and cultural institutes. SGI-Taiwan, under the philosophical guidance of Mr. Ikeda, he said, has engaged itself in activities for education, culture and peace, which coincide with NFU's educational principles for fostering individuals of good moral character. These activities include such collaborative on-campus initiatives as the Community Friendship Festival and the World Children's Peace and Culture Exhibition in 2007 and the exhibition "From a Culture of Violence to a Culture of Peace: Transforming the Human Spirit" in 2008.

In an acceptance message read by Soka Women's College President Hideaki Ishii, Mr. Ikeda expressed his heartfelt appreciation for the honor he received from NFU and for the university's continuing support of SGI-Taiwan’s community activities. He praised President Lin for his leadership and NFU’s focus on holistic education that cultivates leaders for the present age--individuals who are equipped with superior technological skills and intellectual acumen, as well as possessing sound character, the spirit of service and positive human values. Referring to the father of modern China Sun Yat-sen who believed people should set as a life goal serving society and not reaping rewards, Mr. Ikeda concurred with NFU's educational principle of instilling in students the spirit to render service and putting this spirit into action. He further emphasized that the university is a place bourgeoning with promising future leaders dedicated to society. 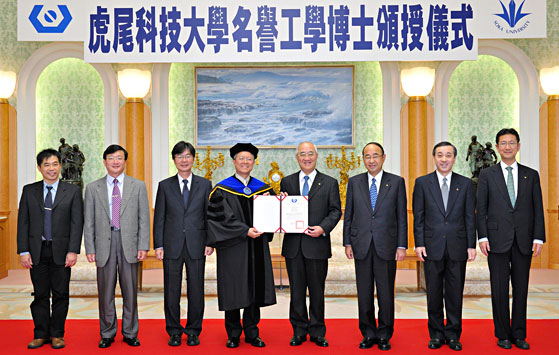 [Adapted from an article in the December 23, 2010, issue of the Seikyo Shimbun, Soka Gakkai, Japan]