Konyang University (KYU) in South Korea presented an honorary doctorate of business administration to Daisaku Ikeda, Soka University founder and SGI president. Mr. Ikeda was recognized for the promotion of academic exchanges on an international level and for his dedication to the cause of world peace and humanity's happiness. The conferral ceremony took place by proxy at the Soka University Central Tower in Hachioji, Tokyo, on December 23, 2010, with the attendance of KYU founding president Kim Hi-Soon, his wife and permanent Board of Trustee member Kim Yun Ye and Vice President of External Relations Kim Yong-Hwa. SGI Vice President Hiromasa Ikeda received degree certificates in Hangul and Japanese along with a commemorative plaque on his father's behalf.

Established in 1991 in Nonsan City, Chungcheong Province, two hours south of Seoul, KYU's founding principle is the fostering of capable individuals who are engaged in the pursuit of truth, creation of history and service to humanity, and its goal is the fulltime employment of its graduates. Graduation requirements include foreign language study and a reading list of 100 classics by such celebrated writers as Shakespeare and Hermann Hesse.

In his conferral speech, KYU President Kim lauded Mr. Ikeda for tearing down the walls of mistrust through the promotion of cultural and educational exchanges, human rights activism and dialogue that transcend ideological and national boundaries. He referred to the profound mentor and disciple relationship shared by Soka Gakkai predecessors Tsunesaburo Makiguchi and his protégé Josei Toda, then between Mr. Toda and his disciple Mr. Ikeda. In turn, Soka University students, who have succeeded Mr. Ikeda's educational vision of fostering global citizens that contribute to society, are manifesting their abilities in various sectors of the global community, said Dr. Kim. As with Mr. Ikeda, the KYU president said he believes humanistic education that fosters the whole person takes precedence over merely inculcating students with knowledge and technological expertise.

In a message of appreciation, Mr. Ikeda expressed his admiration for President Kim's lofty aspirations for nurturing and safeguarding the students in his care and inspiring them to develop an indomitable spirit to surmount hardships and excel. He also concurred with the KYU founder's view that the purpose of education is to enable students to discover the intrinsic light that exists in the depths of one's life and heart. Born in the same year and having lived through the horrors and tragedy of war, he and Dr. Kim empathically share a deep commitment to building a world without war through the power of a just and moral education, he affirmed. 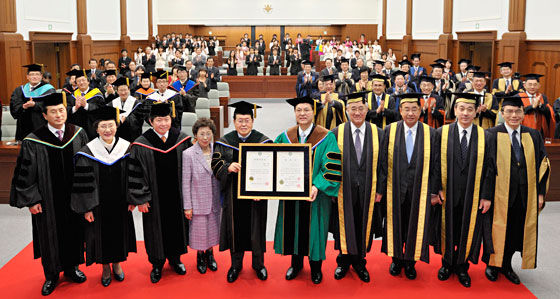 [Adapted from an article in the December 24, 2010, issue of the Seikyo Shimbun, Soka Gakkai, Japan]