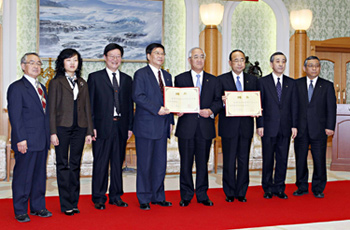 The conferrals took place by proxy at the Soka University (SU) Central Tower in Hachioji, Tokyo. The XAIU delegation comprised vice President for International Affairs Du Ruiqing, who is also dean of the College of Foreign Languages and International Cooperation, Head Librarian Li Rechi, International Affairs Department Chief of the President's Office Wu Yajing, and visiting professor Hidezo Imaruoka. Mr. Ikeda composed a Chinese poem as a gesture of friendship, which was presented to the XAIU delegation.

Founded in 1992, XAIU is one of China's leading private universities. Because of a growing demand for access to education and as a result of academic reforms and an open-door policy in education instituted in recent years, private schools have become popular in China. XAIU, which started with a small number of classrooms and several hundred students, has developed into a comprehensive university with 10 colleges and an enrollment of more than 36,000.

Following a citation, Professor Du entrusted the conferral certificates to SU President Hideo Yamamoto, who accepted them on Mr. and Mrs. Ikeda's behalf.

Describing the university's maxim, "Learning recognizes no frontiers," Professor Du said that it was crucial for educational institutions in China to adopt an international perspective. Professor Li continued that Mr. Daisaku Ikeda and Mrs. Kaneko Ikeda are role models of such global-mindedness and it was for this reason that the university wished to welcome them.

Soka Women's College President Hideaki Ishii read a message from Mr. Ikeda in which he praised XAIU for its "spirit to transform fish into dragons," a metaphor for its efforts to nurture young people’s creativity and aspirations for learning. He further elaborated on the Chinese legend of Longmen, or Dragon Gate, a mythical waterfall that transforms carp into dragons when they successfully climb it, relating this to the struggle for inner transformation.

Mr. Ikeda expressed his gratitude for the honors presented to him and his wife and vowed to continue expanding his efforts to promote educational and cultural exchanges for the sake of world peace and friendship between China and Japan.

[Adapted from an article in the February 28, 2010, issue of the Seikyo Shimbun, Soka Gakkai, Japan]