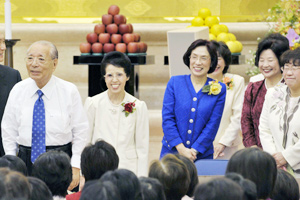 Mr. Ikeda at a light moment during the monthly meeting

"Life is a struggle. Those who challenge themselves and achieve victory are happy." This was the core message of SGI President Daisaku Ikeda's address at the Soka Gakkai's monthly leaders meeting, held in Tokyo on January 9, 2010. Among those present were SGI representatives from 17 countries and territories.

"Buddhism primarily concerns itself with victory or defeat," Mr. Ikeda said, quoting the words of Nichiren (1222-1282), the founder of the school of Buddhism practiced by the SGI. The spirit to take on challenges and win is the starting point and final goal of Buddhism, he affirmed, expressing his hope that each member of the SGI would be firmly resolved to surmount and win over every struggle in the year ahead.

The SGI president addressed many of his remarks to the organization's youth leaders, the presence of whom, he said, filled him with reassurance. "Young people who face daunting challenges but fight vigorously to overcome them go on to become far more capable and resilient than those who lead lives of ease and comfort. They will achieve far greater things than those whose lives are always smooth sailing."

Quoting his mentor, second Soka Gakkai president Josei Toda, he added that hardships are an opportunity to demonstrate the power of faith, change one's karma, and develop fortune.

Commenting on the current difficult economic times, Mr. Ikeda remarked, "I hope you will challenge yourselves with the powerful conviction that such circumstances represent a perfect opportunity for you to do your human revolution, and that you will change all poison into medicine."

Mr. Ikeda described the Buddhist law--the inherent power of life, which Nichiren defined as Nam-myoho-renge-kyo--as "the fundamental power activating and moving all stars, planets, and other celestial bodies in the universe." Members of the SGI "embrace faith in this great Mystic Law and chant the most powerful and supreme rhythm of Nam-myoho-renge-kyo. There is nothing stronger." He affirmed that this Buddhist practice causes "boundless energy and courage [to] surge forth from the depths of our beings."

Welcoming the visiting SGI members from abroad, he remarked that it is "this ardent seeking spirit of our members who think nothing of traveling long distances to deepen their understanding of Buddhism [that] makes the Soka Gakkai strong."

The SGI leader congratulated the women's division members, who were holding small group general meetings around Japan at the same time as the leaders meeting. He said that such small gatherings where people in the local community come together for heart-to-heart dialogue, offering each other mutual encouragement and support, are the starting point of peace.

The Attitude of Leaders

Discussing the correct attitude of leadership Mr. Ikeda confirmed that the mission of leaders in the SGI is to work wholeheartedly to support and inspire the members. "Our attitude is key. Our attitude is revealed in our actions. It is solemnly reflected in every outcome in our lives."

It is especially important for leaders to take the initiative to talk with as many people as possible, he said. This is the way in which leaders develop impressive character and an ability to inspire others.

"When leaders are negligent or overconfident, assuming that things will somehow work out on their own, they are setting themselves up for a major defeat," he cautioned, saying one's determination and actions from this moment on--the spirit to begin afresh--are key. "This unceasing struggle is the driving force for realizing monumental achievements . . . What we do now, from this moment on, decides everything."

He asked the organization's leaders to set forth with such a renewed spirit and resolve, remarking, "Right now, I am working on building a Soka Gakkai that will continue to grow and develop and further achieve brilliant victories into the eternal future. Please join me in this effort."