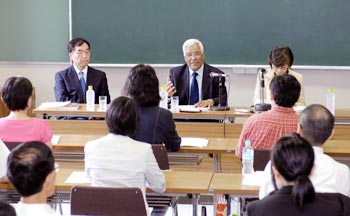 Professor Mohammad El-Sayed Selim speaking at a forum hosted by the Institute of Oriental Philosophy in Hachioji, Tokyo (July 2, 2010)

TOKYO, Japan: Professor Mohammad El-Sayed Selim of Cairo University, the Arabic edition translator of Global Civilization: A Buddhist-Islamic Dialogue, spoke at a forum hosted by the Institute of Oriental Philosophy in Hachioji, Tokyo, on July 2, 2010.

In his speech, Professor Mohammad shared his insights on the history and evolution of Buddhism and Islam, and spoke about the developments that led to the decision by the Egyptian Ministry of Culture's National Center for Translation to publish an Arabic edition of Global Civilization. He said he was grateful for the opportunity to examine the perspectives of the two religious traditions on a broad range of issues discussed by the authors, and expressed his belief and hope that the work would serve to facilitate dialogue in resolving the pressing issues that confront the world today.

[Adapted from an article in the July 5, 2010, issue of the Seikyo Shimbun, Soka Gakkai, Japan]