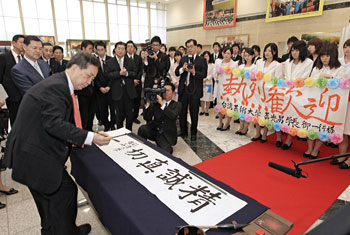 The National Taiwan University of Arts (NTUA) presented an honorary professorship to Daisaku Ikeda, Soka University founder and SGI president, in recognition of Mr. Ikeda's contributions to cultural exchanges on a global scale and his efforts for peace. This is the first time the Taiwanese university has presented this accolade to a citizen of another country. The conferral by proxy took place at the Soka University Central Tower in Hachioji, Tokyo on July 2, 2010. NTUA President Huang Kuang-Nan was accompanied by his wife Kuo Chui-Yen and NTUA International Affairs Director Sung Hsi-Te.

Professor Huang entrusted the certificate for Mr. Ikeda to his son, Soka University Board Trustee Hiromasa Ikeda, expressing his hope that the award would enable the positive influence of Mr. Ikeda's ideals to spread among NTUA students and Taiwanese society as a whole.

In an acceptance message read by proxy, Mr. Ikeda commended Professor Huang for his leadership and his role in developing art education in elementary and junior high schools and art therapy in hospitals. He concurred with Professor Huang that human endeavors are brought to their most successful fruition when supported by action rooted in humanistic ideals. Learning that promotes positive action and scholarship that leads to a contributive life, he affirmed, inspire people to strive to create value. A poem Mr. Ikeda composed in Chinese characters as a gesture of friendship was also presented to Professor Huang.

Founded in 1955 with an aim of preserving and revitalizing Chinese arts and culture, NTUA is the oldest institute of its kind in Taiwan, bringing together the avant garde and the traditional. NTUA enrolls some 5,000 students in the arts, design, media, drama and literature. Many of its graduates have gone on to become top names in their fields, such as Ang Lee, who received an Academy Award for Best Director in 2005.

[Adapted from an article in the July 3, 2010, issue of the Seikyo Shimbun, Soka Gakkai, Japan]