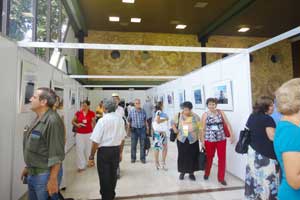 Visitors to the "Dialogue with Nature" photography exhibition in Havana, Cuba

The National Museum of Decorative Arts in Havana, Cuba, is the venue for "Dialogue with Nature," an exhibition of nature and scenic photographs taken by Daisaku Ikeda in Japan and during his travels abroad. Guests at the July 7, 2010, opening included Caridad Diego Bello, head of Cuba's Office of Religious Affairs, Ana Cristina Perera Escalona, vice president of the National Council for Cultural Heritage, and Armando Hart Dávalos, former Cuban Minister of Culture and also a personal friend of Mr. Ikeda.

In an opening speech, Katia Varela Ordaz, director of the National Museum of Decorative Arts, expressed her appreciation for the opportunity to show Mr. Ikeda's photographs and mentioned the exhibition "Treasures of Japanese Art" from the collection of the Tokyo Fuji Art Museum, which was shown at the same venue in July 1996 under the auspices of Mr. Ikeda, founder of the Japanese museum. Recalling Mr. Ikeda's visit to Cuba in June 1996, Mr. Hart commented that the SGI leader's photography overflowed with an affinity for nature, and that the exhibition contributed to developing friendship and exchange between Cuba and Japan.

The exhibition is scheduled to show through August 31, 2010.

[Adapted from an article in the July 21, 2010, issue of the Seikyo Shimbun, Soka Gakkai, Japan]