The National University of Kaohsiung (NUK), Taiwan, recently honored Daisaku Ikeda, SGI president, by presenting him with an honorary professorship for his longstanding contributions to culture and education. At a conferral by proxy held at the Soka University Central Tower on July 29, 2010, NUK President Huang Ing-Chung presented the appointment certificate to Soka University President Hideo Yamamoto, who accepted it on Mr. Ikeda's behalf. A poem Mr. Ikeda composed in Chinese characters was presented to Dr. Huang as a token of friendship.

Located in Kaohsiung, Taiwan's second largest metropolis, NUK was established in 2000 as an institution of higher learning focusing on quality research and teaching with an aim to enhance Taiwan's position as an industrial and business leader of the Asia-Pacific Rim. Some 5,600 students are enrolled in its five colleges--Humanities and Social Sciences, Law, Management, Science and Engineering.

Like Soka University of America, NUK is a signatory of the Talloires Declaration, which advocates education that advances the cause of environmental management and sustainable development and pledges university resources toward an environmentally sustainable future. As of January 2010, 413 college and university presidents have signed the declaration, spanning 52 countries on five continents.

In the citation, Dr. Huang commended Mr. Ikeda for his guiding principles that include a philosophy upholding the absolute dignity of life, respect for cultural diversity and the spirit to share in and empathize with others' sufferings. In a message read by proxy, Mr. Ikeda expressed his heartfelt appreciation for the accolade he had received and vowed to work together with the NUK faculty to help "sow seeds of wisdom" and foster youthful successors who will shoulder responsibility for realizing humanity's dreams and ideals. 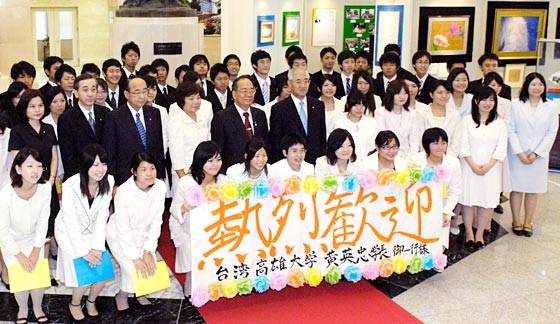 [Adapted from an article in the July 30, 2010, issue of the Seikyo Shimbun, Soka Gakkai, Japan]