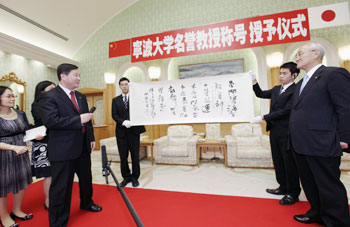 A poem of poet-calligrapher Wang Wenzhi (1730-1802) of the Qing dynasty calligraphed by Arts College Professor Fang Xiangqian is presented to Mr. Ikeda

Ningbo University in Zhejiang Province, China, recently appointed Daisaku Ikeda, Soka University founder and SGI president, an honorary professor and Mrs. Kaneko Ikeda, an honorary director of the university's Women's Institute. Mr. Ikeda was recognized for his dedicated efforts for global peace and Sino-Japanese friendship, and Mr. and Mrs. Ikeda, as a couple, were commended for their longstanding support of and contributions to advancing women's standing in society.

Ningbo University Vice President Feng Zhimin entrusted the certificates and commemorative items to Soka University President Hideo Yamamoto at a conferral by proxy on June 8, 2010, at the Soka University Central Tower in Hachioji, Tokyo. A poem Mr. Ikeda composed in Chinese characters was presented as a gesture of friendship.

In a citation, Professor Feng lauded Mr. Ikeda for his enduring contributions to Sino-Japanese friendship and for promoting women's rights and supporting the women's movement from his earliest days as Soka Gakkai president.

In an acceptance message read by Soka Women's College President Hideaki Ishii, Mr. Ikeda expressed his heartfelt appreciation for the honors he and his wife received. He also expressed his deep regret for the horrific actions of the Japanese Imperial Army during World War II (when in 1940 Japan bombed Ningbo with fleas carrying the bubonic plague), a history that, he said, must never be forgotten. Mr. Ikeda recalled his meetings with Vice Premier Deng Xiaoping, who had created the calligraphy for "Ningbo University" that has become the school's insignia, and spoke of Mr. Deng's emphasis on the importance of education.

Founded in 1986, Ningbo University enrolls over 29,000 students in 19 faculties, including business, law, education, medicine, an Arts College, a Maritime College and a Science and Technology College, as well as a Women's Institute that promotes women's education. The Chinese university also has official academic exchanges with over 70 institutions of higher learning throughout the world. Ningbo City, where the university is located, is the birthplace of the Hemudu Civilization which dates back 7,000 years. It is home to numerous historic Buddhist monuments including the Asoka Temple, one of the "Five Mountains"--the most historically significant temples in China--and is the site of the earliest traces of rice cultivation in the world. 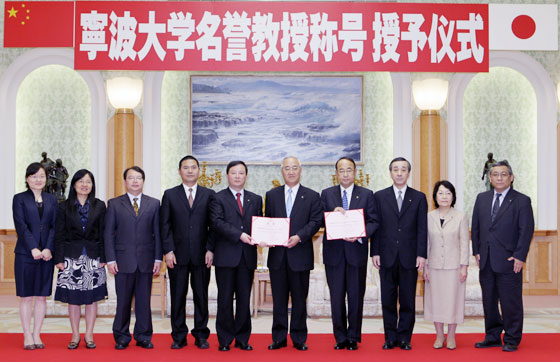 [Adapted from an article in the June 9, 2010, issue of the Seikyo Shimbun, Soka Gakkai, Japan]