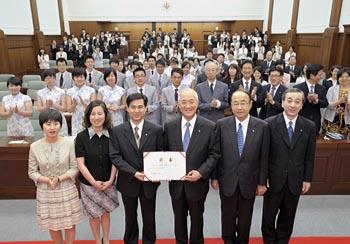 On June 9, 2010, Zhejiang Ocean University in Zhejiang, China, presented Daisaku Ikeda, Soka University founder and SGI president, with an honorary professorship in recognition of his longstanding contributions to cultural and educational exchanges between China and Japan. The conferral took place by proxy at the Soka University Central Tower in Hachioji, Tokyo, with the attendance of a delegation from the Chinese University led by Vice President Song Fujun. He was accompanied by Student Affairs Office Vice Director Li Lingping, Professor Zhang Zhenghua, an instructor in the Foreign Languages College, and 30 student representatives. Soka University President Hideo Yamamoto accepted the certificate of honorary professorship and a commemorative gift from Professor Song on Mr. Ikeda's behalf. A poem Mr. Ikeda composed in Chinese characters was presented to the delegation as a gesture of friendship.

Founded in 1958, Zhejiang Ocean University enrolls 15,000 students in some 40 fields and specializations such as oceanography, marine fisheries and maritime science. The university engages in academic exchanges with institutes in more than 40 countries including the United States, Russia, Japan and Norway.

The citation lauds Mr. Ikeda for his promotion of Sino-Japanese friendship, beginning with his 1968 proposal for the normalization of diplomatic bilateral relations, and describes him as an eminent thinker, educator and social activist whose ideals and actions have had far-reaching influence.

In a message read by Soka Women's College President Hideaki Ishii, Mr. Ikeda expressed his heartfelt appreciation for the honor. He praised Zhejiang Ocean University for its cutting edge research in marine science. The ocean, he said, nurtures life, forges human character, shapes culture and connects the people of the world. These qualities, he said, exemplify the challenges of education, which are being so admirably undertaken by Zhejiang Ocean University.

Prior to the ceremony, Soka University students welcomed the ZJOU delegation to their campus with a song titled "The Bond of Cherry Blossoms." Zhejiang Ocean University graduate student Wang Shiyun stated that she wished to engage in discussions with Japanese youth about Sino-Japanese peace and to share what they learn with other youth, while Zhang Ruixiao keenly felt the development of bilateral friendship rests on the actions taken by youth today.

Professor Song said he had brought a student delegation to the conferral with hopes that their visit to Soka University and Japan would help them broaden their perspectives and foster friendship with Japanese youth. He remarked that the ocean is ever-changing and all-embracing, exemplifying constant development and growth. He hoped the young people of both countries, in the same spirit, would stay at the forefront of transformation and develop strong solidarity.

[Adapted from an article in the June 10, 2010, issue of the Seikyo Shimbun, Soka Gakkai, Japan]