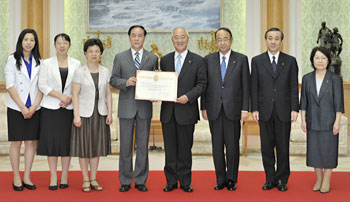 On June 11, 2010, Dalian Polytechnic University, China, presented Daisaku Ikeda, Soka University founder, with an International Education Contribution Award for his longstanding contributions to Sino-Japanese friendship, and educational and cultural exchange and peacebuilding on a global scale. The conferral ceremony by proxy took place in the Soka University Central Tower in Hachioji, Tokyo. Dalian Polytechnic University President Yu Jiayou, heading a delegation from the Chinese university, entrusted the award to Soka University President Hideo Yamamoto. A poem Mr. Ikeda composed in Chinese characters was presented as a gesture of friendship.

Established in 1958, Dalian Polytechnic University enrolls approximately 20,000 students, specializing in light industry, food, textiles and art design. In October 2009, Mr. Ikeda was made an honorary emeritus professor of the university.

In the citation, Professor Yu commended Mr. Ikeda as being instrumental in the normalization of Sino-Japanese diplomatic relations and for constructing a solid foundation for people's diplomacy between the two countries. He said that in keeping with Mr. Ikeda's firm belief that the education of youth determines the future course of humanity and the world, he hoped to strengthen the bonds between students and young instructors of Dalian Polytechnic University and Soka University and to together build a golden bridge of friendship for the sake of Sino-Japanese amity, global peace and humanity's happiness.

[Adapted from an article in the June 12, 2010, issue of the Seikyo Shimbun, Soka Gakkai, Japan]