On June 28, 2010, George Mason University located in Fairfax, Virginia, USA, presented Daisaku Ikeda, Soka University founder, with an honorary Doctorate of Humane Letters for his contributions to cultural exchange, global peacebuilding and the development of youth. The conferral by proxy took place at the Soka University Central Tower in Hachioji, Tokyo. George Mason University Provost Peter N. Stearns was accompanied by Professor William F. Reeder, dean of the College of Visual and Performing Arts, and Professor Andrea Bartoli, director of the Institute for Conflict Analysis and Resolution. Soka University Board of Trustees member Hiromasa Ikeda received the certificate on behalf of his father.

Named after American revolutionary, patriot, and founding father George Mason, the university was founded as a branch of the University of Virginia in 1957 and became an independent institution in 1972. Today, Mason, as the school has come to be referred to, is recognized for its strong programs in law, economics, creative writing and computer science, with over 32,500 students enrolled.

In the citation, Professor Stearns stated that Mr. Ikeda "is a mentor to countless young people," and "as founder of the Soka (value-creation) schools . . . helps to foster each student's creative potential in an atmosphere of peace, respect, social contribution, and global consciousness."

In a message, Mr. Ikeda expressed his appreciation for the privilege of joining the George Mason University community. Commending the university's namesake, author of the Virginia Constitution, which became the foundation of the Bill of Rights to the U.S. Constitution that upholds an individual's right to freedom of religion and other core rights, Mr. Ikeda said, ''The courageous cry of a single individual has the power to change the course of history. George Mason's unyielding commitment to fundamental rights has had an impact that is both profound and far-reaching." In closing, Mr. Ikeda concurred with George Mason, who affirmed that "to attain and preserve [liberty and independence] must depend upon our own Wisdom and Virtue," and expressed his own hope and belief that "it is our young people who will determine the future of humankind." 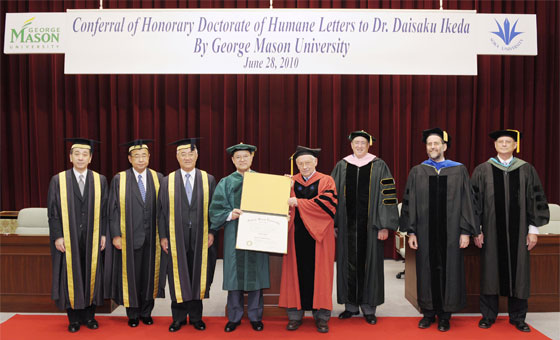 Mason Provost Peter N. Stearns (4th from right) entrusts the certificate of honorary Doctorate of Humane Letters for Mr. Ikeda to his son, Hiromasa Ikeda (4th from left), while Professor Reeder (3rd from right) and Professor Bartoli (2nd from right) look on

[Adapted from an article in the June 29, 2010, issue of the Seikyo Shimbun, Soka Gakkai, Japan]