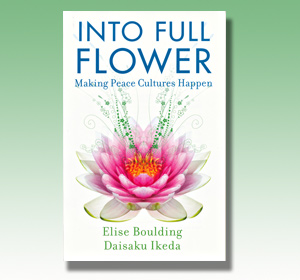 CAMBRIDGE, USA: On March 6, 2010, the Ikeda Center for Peace, Learning, and Dialogue hosted Into Full Flower: Making Peace Cultures Happen, an event celebrating a dialogue by Dr. Elise Boulding and Daisaku Ikeda that was recently released by Dialogue Path Press under the same name. More than 80 people attended the event at the center, which was founded by Mr. Ikeda in 1993.

Into Full Flower is the result of 15 conversations between Dr. Boulding, Professor of Sociology, Emerita, at Dartmouth College, and Mr. Ikeda. In the dialogue, the authors explore the dynamic qualities of peace cultures, including peace building as a continuum that begins with the family and expands to global institutions, valuing women's contributions at all levels of society, and education as a holistic, lifelong process.

Among the guests who spoke at the Ikeda Center event were Russell Boulding, Dr. Boulding's eldest son, and Dr. Mary Lee Morrison, her biographer. In his address, Mr. Boulding said his mother and Mr. Ikeda were both "spiritually grounded visionaries and bridge-builders . . . [with] a commitment to peacemaking at an international level that is grounded in the importance of education and the empowerment of women and children."

Dr. Morrison describes Dr. Boulding, who developed the first peace studies program in the United States at Dartmouth, as "the matriarch" of the twentieth-century peace research movement. She played an instrumental role in the 1964 founding of the International Peace Research Association, a global network for peace scholars, activists and decision-makers.

The Ikeda Center is a think tank engaged in the search for ideas and solutions to assist in the peaceful evolution of humanity, offering a range of perspectives on key issues in global ethics. Among its programs are public forums and scholarly seminars that are organized in collaboration with other institutions. The Center also publishes books on education and global concerns, works that have been used in more than 600 college and university courses to date. 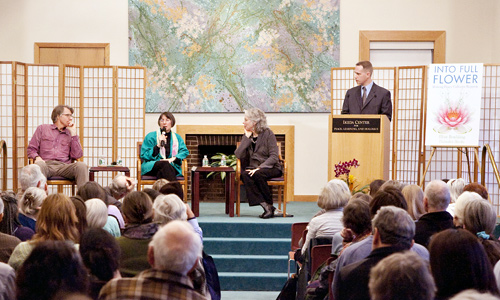 [Adapted from a March 11, 2010, press release issued by the Ikeda Center for Peace, Learning and Dialogue, Cambridge, Massachusetts, USA; photos courtesy of the Ikeda Center]