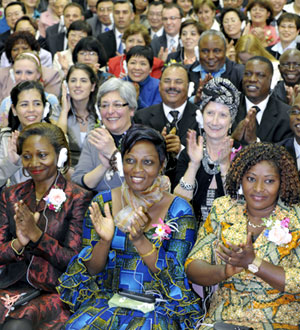 250 SGI members from 60 countries and territories were in attendance

On March 6, 2010, Daisaku Ikeda, SGI president, spoke at the monthly Soka Gakkai leaders meeting in Tokyo. The meeting was held in conjunction with a nationwide gathering of men's division leaders and was attended by 250 SGI representatives from 60 countries and territories.

Commenting on the growth of the SGI worldwide, Mr. Ikeda said it was all the more important that the organization's leaders stay humble and down-to-earth and treat people with the highest respect. "Your first priority as leaders is to hasten to the side of those weighed down by problems and suffering and offer them warm words of encouragement," he said. "Arrogance destroys Buddhism," he cautioned. "Leaders who are always modest and deferential are truly admirable." It is the mission of leaders, he continued, to pray and work wholeheartedly for the happiness of the organization's members and give thought to how they can contribute to the prosperity of society and world peace. He asked that the members always have the courage to speak out against arrogance.

Describing his own youthful struggles alongside second Soka Gakkai President Josei Toda to develop the fledgling Soka Gakkai, Mr. Ikeda remarked, "In the early days of our movement, there were many longstanding leaders working alongside Mr. Toda, but he entrusted everything to the youth . . . In any age, youth are always the key." Encouraging young people to take a leading role, he commented, "Mr. Toda insisted that nothing is worse than cowardice. Each individual, he said, needs to cultivate the dignity of a lion king . . . If each of us isn't strong and committed to the welfare of others and society, everyone will suffer. There is no need whatsoever for the youth to hold back or be shy."

The SGI president described his own efforts to meet and hold dialogues with world leaders of various fields for the sake of peace: "While still a young man, I pioneered the path of dialogue as an ordinary citizen, not as a government official or representative. Whether talking with heads of state or other ordinary citizens, I've always been openhearted and sincere, seeking to sow the seeds for lasting trust and friendship." He said that it was the inspiration he received from his mentor, Josei Toda, that emboldened him to carry out such actions.

Mr. Ikeda said his efforts were motivated by his wish to validate the teachings of his mentor. "From my youth, I vowed that I would make Mr. Toda's accomplishments known throughout the world. I knew he was an exceptional spiritual leader, and I've spent my life telling people of my mentor's greatness." He described Mr. Toda as someone who was always actively engaged with people on the basis of his firm conviction that the ultimate aim of the Soka Gakkai is to free the world and humankind of suffering. The power to effect such change lies in a change in each individual. "Your individual human revolutions have the power to move your families, society, and even the world in a more hopeful direction," Mr. Ikeda said.

Encouraging people struggling amidst the current economic downturn or battling illness not to give up hope, the SGI president quoted Mr. Toda's words: "There are times in life when it feels like we've entered a dark tunnel. But once we make it through the tunnel, a beautiful landscape will greet our eyes again. The key is not to stop halfway. Keep making efforts and pressing forward right to the very end based on faith."

The SGI leader acknowledged the SGI members who had traveled from throughout the world, thanking them for their efforts. Responding to the African representatives, he said he was happy to know that SGI members are striving in countries throughout the African continent, asking them to convey his regards to everyone back home on their return.

He concluded his speech, saying, "Please advance in harmony and good cheer in your respective communities and countries . . . All the efforts you make in your SGI activities for the happiness of others and the creation of a better society will return to you."