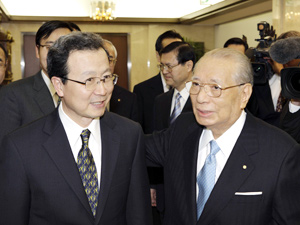 Extending his congratulations on the ambassador's new appointment, Mr. Ikeda reaffirmed both the Soka Gakkai's and his own continuing commitment to enhancing Sino-Japanese relations.

Ambassador Cheng, 55, was among the first students who came to Japan under a Chinese government scholarship in 1975, studying at Soka University. After graduating from Soka University, he entered the Chinese Ministry of Foreign Affairs and was posted in Japan from 1977, eventually serving as a counselor and deputy chief of mission at the Chinese embassy in Tokyo. In 2006, he was appointed ambassador to Malaysia and, in 2008, assumed the ambassadorship in the Republic of Korea.

Mr. Ikeda related that among the hundreds of individuals he has met on his travels abroad, his meeting with former Chinese Premier Zhou Enlai, who although gravely ill at the time insisted on the meeting, stands among the most memorable. In honor of the Chinese leader, Mr. Ikeda had a cherry blossom tree planted at Soka University in 1975. Thirty-five years later, the tree's magnificent flowering is a fitting symbol of the way Sino-Japanese friendship has blossomed, he remarked.

China and the Soka Gakkai have exchanged youth goodwill delegations for over 20 years, aiming to heal historical rifts between Japan and China and build mutual understanding between the people of the two countries. The next Soka Gakkai group will be leaving for China in August 2010. Institutions affiliated with the Soka Gakkai have also served in the bilateral promotion of educational, artistic and cultural exchange. The Min-On Concert Association, for example, has showcased Chinese culture to some 2.5 million people in Japan to date by sponsoring tours of such groups as the China National Acrobatic Troupe, which is currently touring Japan.

[For related information, see the "Sino-Japanese Relations" chapter in the Peacebuilder section]

[Adapted from an article in the March 10, 2010, issue of the Seikyo Shimbun, Soka Gakkai, Japan]