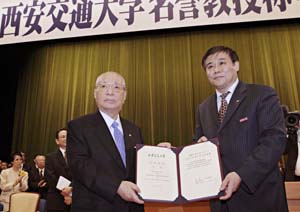 In his presentation address, Dr. Wang Jianhua, chairman of the Xi'an Jiaotong University Council, described Mr. Ikeda as a longstanding admirer and friend of China, who has pioneered the effort to better ties between China and Japan. He also cited Mr. Ikeda's contributions to the advancement of peace, cultural exchange and education worldwide, as well as his advocacy of global sustainable development.

Warmly thanking Xi'an Jiaotong University for its citation, Mr. Ikeda called upon the graduating Soka students to join him in further strengthening ties with China. "Without the goodwill and friendship of China, Japan cannot expect to flourish," he said.

He pointed out that the first two Soka Gakkai presidents, Tsunesaburo Makiguchi and his protégé, Josei Toda, believed that education is a force for social reform and that this belief led to their imprisonment by the Japanese militarist regime during World War II. A state obsessed with power, said Mr. Ikeda, "invariably seeks to intimidate people of virtue and oppress them."

In addition to Dr. Wang, representatives of the Xi'an Jiaotong University included Director Liang Li of the Department of International Cooperation and Exchanges (DICE); Liu Xiao, DICE Officer of Japanese Affairs; Professor Rong Mingzhe, executive dean of the Electrical Engineering School; Professor Geng Yingsan, director of the Electrical Apparatus Division; and Associate Professor Xiaobin Ma, vice president of the university. Professor Ernst Ulrich von Weizsäcker of Stavanger University in Norway was also present as a guest, and Professor Sarah Wider, former president of the Ralph Waldo Emerson Society in the U.S., sent a message of congratulations for the occasion.

Originally dedicated in 1896 in Shanghai, the university is among the oldest seats of higher learning in China. Relocated to Xi'an in 1956, it has since developed into a comprehensive university system with a faculty of more than 5,000 instructing some 30,000 students majoring in 19 departments and schools, including medicine, economics, engineering, law and education. The university also operates three medical centers and four national research laboratories.

[Adapted from an article in the March 22, 2010, issue of the Seikyo Shimbun, Soka Gakkai, Japan]