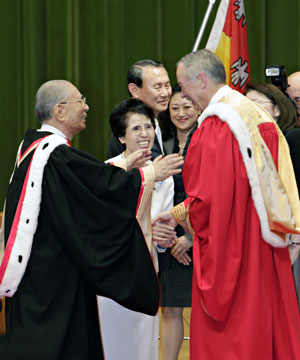 Founded in 1663, Université Laval, in Quebec, is the oldest French language university in North America, as well as one of Canada's largest, with an enrollment of some 45,000 students in 17 faculties and 395 programs. It has 37 institutes conducting research in the medical, social and natural sciences, as well as in education, sustainable development and cultural heritage.

In the citation, Rector Brière congratulated Mr. Ikeda for marking the 50th anniversary of his inauguration as Soka Gakkai president on the previous day. He commended the Soka University founder for promoting global citizenship and respect for human dignity through the Soka Schools System, which is based on the theory of value creation inspired by educator and first Soka Gakkai President Tsunesaburo Makiguchi. Rector Brière added that Mr. Ikeda, as a staunch proponent of dialogue who has collaborated with leaders from different sectors of society internationally, is himself a model of global citizenship.

In the conferral ceremony, Mr. Ikeda was presented with the university hood by Vice Rector Bauce and a certificate of appointment from Rector Brière. He then placed his signature in the record book of Université Laval honorary degree recipients.

Expressing his heartfelt appreciation to Université Laval for the academic honor, Mr. Ikeda suggested that the foundations for the university's success it has enjoyed over the years were laid in the nineteenth century, when it underwent a period of remarkable growth as a result of the efforts of three generations of mentors and their protégés. Nothing that is truly significant and enduring can be achieved in a single generation, he said. Those who are impatient, added Mr. Ikeda, are likely to see their courage and commitment wane, and abandon long-sought goals in the end. He urged the members of Soka University's Class of 2010 and the alumni to excel in their places of work and serve their respective communities with the utmost patience and courage.

[Adapted from an article in the May 5, 2010, issue of the Seikyo Shimbun, Soka Gakkai, Japan]