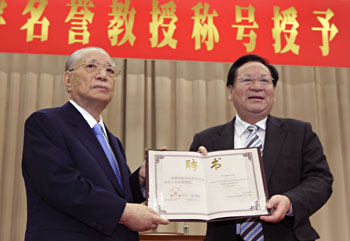 Tsinghua University, located in Beijing, China, is among China's top universities, alongside Peking University and Shanghai Jiao Tong University, and its MBA program is ranked as one of the best in the world. Established in 1911, it counts among its alumni influential figures such as Nobel physics laureates Yang Chen Ning and Lee Tsung Dao, Chinese President Hu Jintao and historian and writer Ji Xianlin.

In his conferral speech, President Gu praised the "exceptional far-sightedness" of Mr. Ikeda's 1968 public proposal for the normalization of diplomatic relations between China and Japan, which "set a clear direction for the development of friendly bilateral ties between our two countries." President Gu also thanked Mr. Ikeda as the founder of Soka University for accepting the first Chinese students to Japan. He added, "In dedicating his entire life to advocating and taking action to realize the ideal of lasting global peace and the happiness of humankind, Mr. Ikeda has won widespread recognition as well as respect and appreciation from peace-loving people in China and around the world."

Ambassador Cheng, who had been among that first group of Chinese students to study at Soka University, broke tradition and gave his congratulatory speech in Japanese. Many of those original Chinese students, Mr. Cheng related, presently are active in high levels of Chinese society and are contributing to strengthening Sino-Japanese friendship. He expressed his hope and expectations for China and Japan to take this opportunity to work to further educational exchanges and cooperation while deepening mutual understanding and trust.

Mr. Ikeda began his acceptance speech by sharing a motto created by students of Tsinghua University: "It begins with me. It begins right now." This attitude, he said, is the basis for the development of individual potential and the ability to make meaningful contributions to society. He said he hoped the youth of Japan would learn this spirit that had propelled the students of Tsinghua. He declared that it was a privilege and an honor to receive an honorary professorship from a university fostering such outstanding individuals, and that he accepted it with a deep sense of responsibility.

The SGI leader commented that he was profoundly inspired by three keys for leadership propounded by University President Gu, a leading biologist and educator. These are the ability to create something new, having a global outlook and a sense of social responsibility. He spoke about the renowned modern Chinese poet and scholar Wen Yiduo (1899-1946), once a student of Tsinghua University, who expressed his belief that women would increasingly take the lead in all aspects of culture and society, offering new role models of leadership. Men's ability to truly appreciate and respect women would give rise to a new source of power in society, Mr. Ikeda said, expressing his wholehearted concurrence with Wen Yiduo's sentiments and his expectations for what he has called the dawning of "the Century of Women."

In conclusion, Mr. Ikeda voiced his hope that Japanese youth would never forget their debt of gratitude to China as Japan's cultural benefactor and would take action to further strengthen bonds of friendship with the Chinese people, visiting China and studying its culture and language.

This honorary professorship brings to 288 the total number of academic honors awarded to Mr. Ikeda by institutions in 51 countries and territories for his contributions to building peace, cultural exchange and the promotion of dialogue.

Presently, Soka University, which Mr. Ikeda founded, has exchange programs with more than 30 universities in China, including Tsinghua University since 2003. Mr. Ikeda is also founder of the Min-On Concert Association which has promoted cultural exchanges between Japan and China over the past 35 years. This year Min-On has invited the China National Acrobatic Troupe to tour major Japanese cities from February to May 2010.

[Adapted from an SGI Office of Public Information press release dated May 13, 2010, and articles in the May 14 and 23, 2010, issues of the Seikyo Shimbun, Soka Gakkai, Japan]