Volumes of The New Human Revolution Released in Four Languages 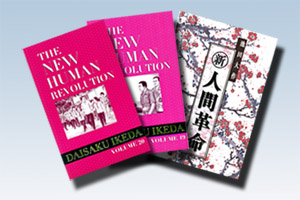 English editions of Volumes 19 and 20 by World Tribune Press, USA, and a traditional Chinese edition of Volume 20 by Cosmos Books, Hong Kong

LOS ANGELES, USA: World Tribune Press recently published Volumes 19 and 20 of The New Human Revolution, a historical novel detailing the international development of the Soka Gakkai lay Buddhist organization under the leadership of Daisaku Ikeda. The series recounts the experiences of pioneering members who have challenged and surmounted countless personal struggles through their Buddhist practice. Volume 19 focuses on Mr. Ikeda’s activities in 1974, while Volume 20 details his visits to China and the former Soviet Union to foster peace and understanding between the two countries. His visit to the United Nations Headquarters in New York to deliver 10 million signatures calling for the abolition of nuclear weapons is also recounted.

The New Human Revolution is a sequel to The Human Revolution, which describes the effort of second Soka Gakkai president, Josei Toda, to rebuild the organization in the aftermath of World War II.