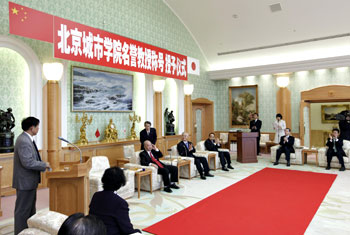 Beijing City University in Beijing, China, conferred an honorary professorship on Daisaku Ikeda, Soka University founder and SGI president, in recognition of his longstanding contributions toward promoting Sino-Japanese friendship as well as educational and cultural exchanges. Mrs. Kaneko Ikeda also received the university's Award of Honor for her role in promoting peace, culture and education in partnership with Mr. Ikeda. The conferral, conducted by proxy, was held on May 28, 2010, at the Soka University Central Tower in Hachioji, Tokyo, and was attended by a delegation from BCU led by Professor Fu Zhengtai, former BCU president and founder. Member of the BCU Board of Trustee Duan Bingren read the citation and entrusted the certificates for Mr. and Mrs. Ikeda to Soka University President Hideo Yamamoto. A poem Mr. Ikeda composed in Chinese characters was presented to Professor Fu as a token of friendship.

Beijing City University was founded by Professor Fu Zhengtai in the early 1980's as the first private institution of higher learning in the new China. Today, it is a university with around 30,000 students and faculty members.

Referring to Mr. Ikeda's dedication to develop friendly relations between China and Japan, Professor Fu remarked that he was impressed by the many youth who have inherited and are carrying forward Mr. Ikeda's legacy. In his conferral speech, Mr. Duan commended Mr. Ikeda as a longstanding friend of the Chinese people as attested to by his public call in 1968 for the normalization of Sino-Japanese diplomatic relations and for the United Nations to accept China as a member state. Mr. Ikeda's stand resulted in a storm of criticism at home and abroad at the time. His efforts to meet with past and present Chinese leaders such as the late premier Zhou Enlai (1898-1976) and former vice premier Deng Xiaoping (1904-97), former president Jiang Zemin and current president Hu Jintao, reflect his immense contributions to bilateral relations, Mr. Duan affirmed.

In a message read by Soka Women's College President Hideaki Ishii, Mr. Ikeda expressed his deep appreciation for the honors he and his wife received, saying he wished to share the accolades with SGI members throughout the world. Citing former Chinese premier Zhou Enlai's belief that while construction is always accompanied by difficulties they can all be overcome, Mr. Ikeda affirmed, "Construction is truly a tough battle." He praised founder Fu for surmounting countless obstacles to establish Beijing City University and creating a legacy of caring for each student like a parent. The Soka University founder also commended the Chinese university for its reputation of a nearly 100 percent job recruitment rate for its graduates in the present economic downturn.

[Adapted from an article in the May 29, 2010, issue of the Seikyo Shimbun, Soka Gakkai, Japan]