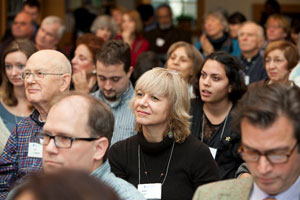 Participants at the Ikeda Forum for Intercultural Dialogue

On November 6, 2010, the Ikeda Center for Peace, Learning, and Dialogue in Cambridge, Massachusetts, USA, held its seventh annual Ikeda Forum for Intercultural Dialogue to explore democracy not as a form of government but as a more sublime process and goal to empower individuals and better the society in which they live. Entitled "This Noble Experiment: Developing the Democratic Spirit," the Forum featured such distinguished presenters as L.R. Berger, Sarah Wider, Fernando Reimers, Anita Patterson and Vincent Harding. The theme drew inspiration from Daisaku Ikeda's congratulatory message delivered by proxy at the Soka University of America commencement ceremony in 2005, in which he described the effort to achieve democracy as "this noble experiment."

Vincent Harding, professor emeritus of religion and social change at the Iliff School of Theology in Denver, Colorado, was a friend and confidant of Martin Luther King Jr. in what Harding calls "the movement to expand democracy" rather than the more common "civil rights movement." In his view, it was the democratic ideals of freedom and equality that carried sufficient moral and spiritual force to encourage African-Americans to organize and insist, at great personal risk, on difficult personal, social and political changes in America. "What could be more noble," Prof. Harding pointed out, "than the experiment that says that those who were brought by force to this country as slaves determined to become its greatest teachers of freedom?"

Other presenters, including poet and social activist L.R. Berger and Sarah Wider, who is professor of English and women's studies at Colgate University, emphasized the spiritual and poetic qualities of the democratic spirit. Prof. Wider felt that poetry excels at calling forth the ideas and insights needed to enrich our world and inspire the democratic spirit.

Anita Patterson, associate professor of English at Boston University, and Fernando Reimers, Ford Foundation Professor of International Education at the Harvard Graduate School Education, agreed that the educational system in the United States today is more concerned with a student's career goals than ways to enrich his or her quality of life. Prof. Reimers noted that a wiser path, one better suited for future global well being, would place peace building and the promotion of human rights at the heart of the curriculum. [Read the full report on the Ikeda Center site: "This Noble Experiment"--7th Annual Ikeda Forum] 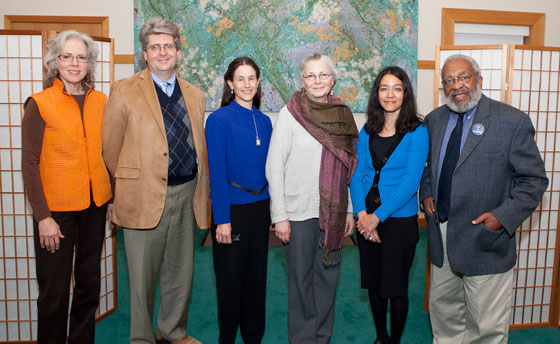 [Adapted from a November 6, 2010, report on the Ikeda Center for Peace, Learning, and Dialogue website; photos courtesy of Marilyn Humphries]