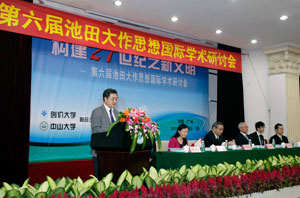 On November 6 and 7, 2010, some 200 researchers from 65 universities and institutions gathered at Sun Yat-sen University in Guangzhou, China, to take part in the Sixth International Symposium on Daisaku Ikeda's ideals titled "Building a New Civilization in the 21st Century." The symposium was cosponsored by Sun Yat-sen University and Soka University and was held in Guangdong Province. At the conference, 50 research papers discussing the cultural, pacifist and humanistic aspects of the SGI president's philosophy were presented during four break-out sessions and five panel discussions.

In a message, Mr. Ikeda referred to the Confucian concept of datong, or "great harmony," and emphasized that now is the time for people to bring together their collective wisdom and unite their efforts to discover value-creative solutions for addressing growing global concerns such as environmental pollution, economic recession, spiritual degradation and frequent natural disasters and pandemics. In addition, he expressed his conviction that "an ethos of coexistence" cultivated over thousands of years of Eastern thought will serve as an ever-flowing wellspring of hope for building a new civilization abounding in harmonious accord and creativity.

In her keynote presentation, Sun Yat-sen University Vice President Li Ping stated that a civilization built on dialogue is crucial in shaping humanity's future, and that the key to this is found in Mr. Ikeda's philosophy and activities. At the closing ceremony, Dean Zhong Minghua of the College of Education at Sun Yat-sen University provided a general overview. The thrust of the symposium's theme, he explained, was to examine the role of Eastern civilization in shaping society, both in theory and in practical application. Further, he concurred with Mr. Ikeda's view that the flourishing of Eastern wisdom would be integral in building a new civilization, and expressed his hope to continue exploring Mr. Ikeda's ideals and contributing to humanity's happiness and well-being.

[Adapted from an article in the November 11, 2010, issue of the Seikyo Shimbun, Soka Gakkai, Japan]