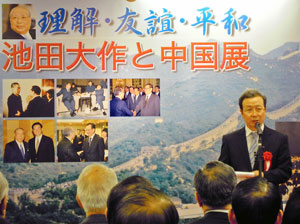 On November 19, 2010, "Daisaku Ikeda and China Exhibition--Understanding, Friendship and Peace," an exhibition chronicling the SGI President's contributions to Sino-Japanese friendship, launched at the China Culture Center in Tokyo. Some 130 guests attended the opening, including Chinese Ambassador to Japan Cheng Yonghua, Association for International Understanding of China Board Trustee Liu Deyou, who is also a former vice minister of culture in China, and Soka Gakkai President Minoru Harada. The exhibition, which will show through December 12, 2010, is being sponsored by the China Culture Center in Tokyo and the China-Japan Friendship Association, with support from the Chinese Embassy in Tokyo, the Chinese People's Association for Friendship with Foreign Countries and the Soka Gakkai.

In a speech at the opening, Ambassador Cheng congratulated the Soka Gakkai for its 80th anniversary on November 18 and reminisced about his days at Soka University in Hachioji, Tokyo, as one of the first group of Chinese students to study in Japan after the normalization of diplomatic relations between the two countries. Ambassador Cheng recalled that, at Mr. Ikeda's suggestion, they had planted a cherry tree on the Soka University campus in memory of Premier Zhou Enlai, an event that had left a lasting impression on him. Mr. Cheng said that the purpose of the exhibition is not only to introduce Mr. Ikeda's contributions to strengthening Sino-Japanese relations but to serve as an inspiration to others who also support this cause. 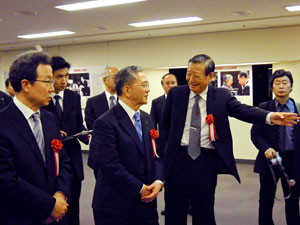 Following words by Mr. Harada, Mr. Liu said, "Premier Zhou would often refer to the Chinese proverb 'When you drink water, remember the one who dug the well.'" According to Mr. Liu, who had served as Premier Zhou's interpreter during the Chinese leader's meeting with Mr. Ikeda, this was Premier Zhou's way of saying, "We must never forget those who have contributed to Sino-Japanese friendship." In 1968, Mr. Ikeda had made a public declaration calling for the normalization of ties between China and Japan, which led to his meeting with the Chinese leader in December 1974. Mr. Liu expressed his hope that the citizens of Japan and China would follow in the footsteps of the "one who dug the well" and continue paving a path of peace and friendship for the sake of the people of both countries.

[Adapted from an article in the November 20, 2010, issue of the Seikyo Shimbun, Soka Gakkai, Japan]