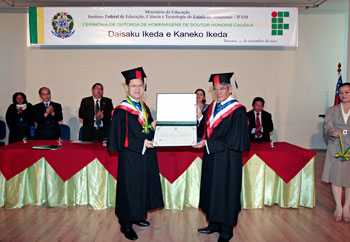 The Federal Institute of Education, Science and Technology of Amazonas in Brazil recently presented honorary doctorates to Daisaku Ikeda, SGI president and Soka University founder, and his wife Kaneko Ikeda. The institute's supreme advisory council made the unanimous decision to confer its first ever honorary doctorates upon the Ikedas in recognition of their global contributions to peace, culture and education, as well as their dedication to the preservation and development of the Amazon.

The presentation took place by proxy at the institute's central campus in Manaus, the capitol of Amazonas State, on November 28, 2010. Rector João Martins Dias entrusted the degree certificates for Mr. and Mrs. Ikeda, together with a medal commemorating the Brazilian institute's centennial in 2009, to SGI Vice President Hiromasa Ikeda, who received them on behalf of his parents. Noted Brazilian poet and activist Thiago de Mello presented a congratulatory speech at the conferral ceremony.

Professor José Maurício do Rego Feitoza, director-general of the Manaus East Zone Campus, who nominated the SGI president and his wife for the honorary doctorates, remarked that the conferral of the accolades was significant in strengthening the more than one hundred years of friendship between Brazil and Japan. He commended Mr. Ikeda for his contributions to Brazil's development through SGI-Brazil (BSGI) and BSGI's Amazon Ecological Research Center and commented that the humanitarian achievements and network-building of the Ikedas have transcended cultural, national and geographic boundaries.

Calling Mr. Ikeda a great role model and eminent mentor for the people of the future as well as of the present, Rector Diaz remarked in his citation that Mr. Ikeda has continued to demonstrate the importance of listening to others, embracing grand visions and engaging in dialogue. For Mr. Ikeda, education is a vehicle for the interlinking and harmonious development of humanity, Rector Diaz said.

Conveying his deep appreciation for the accolade in an acceptance message read by his son, Mr. Ikeda said that a superlative educational environment is created through the educator's personal commitment and resolve and breadth of character, which is reflected in his or her consideration and love for the students. Remarking on the necessity of a clear perspective on life and humanity for a resolution to the problems of environmental degradation, poverty and violence, he quoted the words of Brazilian journalist and human rights activist Austregésilo de Athayde (1898-1993), with whom he engaged in dialogue. Mr. Athayde had spoken of the importance of reconnecting with our humanity and awakening to our responsibility as guardians of the Earth.

In a similar vein, Mr. Ikeda described the sentiments of Brazilian poet and activist Thiago de Mello that destroying the environment is tantamount to destroying our humanity. He commented that Buddhism, too, elucidates the oneness of the natural environment and human life and expressed his agreement with Mr. Mello's ideas that to promote the flourishing of the Amazon is to promote a prosperous future for the Earth, and that the Amazon is a nurturing entity that nourishes boundless possibilities of our humanity.

Having its start as a vocational training school in 1909, the Federal Institute of Education, Science and Technology of Amazonas has steadily fostered outstanding individuals active in their dedication to society and the preservation of the Amazon. The institute offers engineering, biology, physics, mathematics, chemistry, architecture and agriculture on its ten campuses with an aim of supporting sustainable development in the Amazon Basin.

[Adapted from an article in the December 4, 2010, issue of the Seikyo Shimbun, Soka Gakkai, Japan]