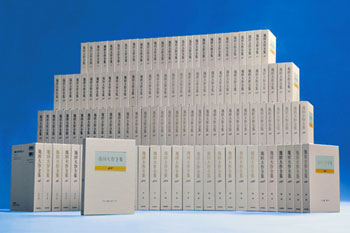 To commemorate the 80th anniversary of the founding of the Soka Gakkai, the Seikyo Press has published Volume 100 of Ikeda Daisaku Zenshu (The Complete Works of Daisaku Ikeda--tentative translation), completing Volumes 1 to 100. Of the 150 planned volumes, this is the 122nd and contains major speeches made by Mr. Ikeda between January and April 2006.

Ikeda Daisaku Zenshu is a comprehensive collection of Mr. Ikeda's works in Japanese including essays, university lectures, articles, dialogues, poetry, treatises on Buddhist philosophy, and proposals for the advancement of peace, education and environmental protection.

[Adapted from an article in the November 17, 2010, issue of the Seikyo Shimbun, Soka Gakkai, Japan]