On October 13, 2010, the Science Academy of the Dominican Republic presented SGI President Daisaku Ikeda with an Honorary Nonresident Membership for his contributions to humanistic approaches in a wide range of fields including scholarship, science and ethics. The presentation took place by proxy at Soka University in Hachioji, Tokyo. Academy President Nelson Moreno-Ceballos and his wife Cecilia Caballero de Moreno, executive director of International Affairs, were among those attending the ceremony.

Founded in 1974 and located in Santo Domingo, the academy is known for its facilitation of the nation's scientific and technological development, academic exchanges with research institutions both at home and abroad, and a wide range of publication activity. Its membership comprises leading scientists, university professors and medical scientists.

President Moreno-Ceballos said there was much to learn from Mr. Ikeda and his belief in the inner transformation of human beings, as well as from his humanistic activities. He added that through Mr. Ikeda's honorary membership and recognition of his accomplishments, the president hoped to enhance awareness in other countries of Mr. Ikeda's universal philosophy. 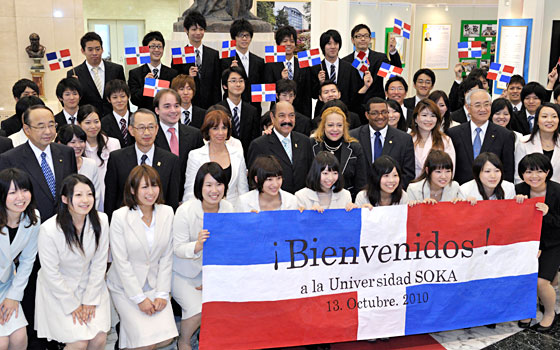 [Adapted from an article in the October 14, 2010, issue of the Seikyo Shimbun, Soka Gakkai, Japan]