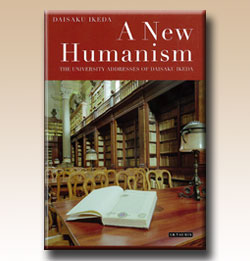 LONDON, UK: Publisher I.B. Tauris has released an expanded edition of A New Humanism: The University Addresses of Daisaku Ikeda. Originally published by Weatherhill, Inc. in 1996, the work features 22 lectures delivered between 1974 and 1994, including those Mr. Ikeda presented at the Brazilian Academy of Letters, the Institute de France, Peking University and Harvard University. The I.B. Tauris edition includes six additional lectures, among them "Thoughts on Education for Global Citizenship," which Mr. Ikeda delivered at Columbia University in 1996.

A New Humanism examines humanism from a Buddhist perspective and addresses students, educators and intellectuals throughout scholarly communities in the East and West. In each lecture, Mr. Ikeda delves into the cultural and philosophical themes relevant to each particular audience and, in discussing human nature in all its complexity, the innate potential humans possess for virtue and transformation.

[Adapted from an article in the October 21, 2010, issue of the Seikyo Shimbun, Soka Gakkai, Japan]