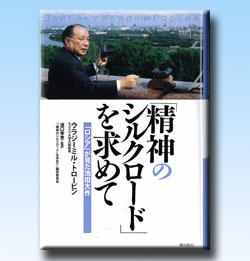 TOKYO, Japan: Ushio Publishing Co. has released the Japanese edition of Seishin no shirukurodo o motomete--Roshia ga mita Ikeda Daisaku (tentative translation: In Search of a Spiritual Silk Road: One Russian's Perspectives on Daisaku Ikeda) by Dr. Vladimir Ivanovich Tropin, former vice rector of Lomonosov Moscow State University. In this narrative account, Dr. Tropin examines the impact of Mr. Ikeda's groundbreaking visits as a Buddhist leader and private citizen to the former Soviet Union at the height of the Cold War, and his engagement in various academic and cultural exchange initiatives that continue to influence bilateral relations to this day.

As the head of his university's international exchange programs, Dr. Tropin met Mr. Ikeda in 1974, accompanying the latter throughout his initial visit to the Soviet Union. The two developed a close friendship over the years, having met in Moscow and Tokyo on many occasions since then. According to Dr. Tropin, this book is a "testimonial to history" of Mr. Ikeda's contributions to the advancement of Russo-Japanese ties.

[Adapted from an article in the October 19, 2010, issue of the Seikyo Shimbun, Soka Gakkai, Japan]