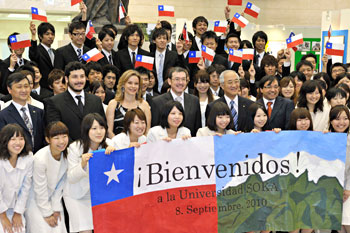 On September 8, 2010, Pedro de Valdivia University, a private institution in Chile, presented honorary doctorates to Soka University founder Daisaku Ikeda and his wife, Kaneko Ikeda, in recognition of their efforts to promote values such as culture, the arts and education throughout the world. The conferral took place by proxy at the Soka University campus in Hachioji, Tokyo, and was attended by representatives including Rector Ángel Maulén Ríos, his wife Candice Rudloff Bossonney, chair of the Department of Medicine, and his son Ángel Maulén Rodríguez, director of International Relations. At the ceremony, Rector Maulén Ríos and Professor Rudloff Bossonney presented the honorary degree certificates and commemorative medals to Soka University President Hideo Yamamoto, who accepted them on Mr. and Mrs. Ikeda’s behalf. Earlier, Rector Maulén Ríos had also entrusted a message for Mr. Ikeda from former Chilean president Patricio Aylwin Azócar, with whom Mr. Ikeda published a dialogue titled Dawn of the Pacific in 1997.

When Rector Maulén Ríos began the task of developing an educational system, his country was under military rule. He began by founding a preparatory school, which eventually grew into the equivalent of primary, junior high and senior high schools. In 2007, following Chile’s democratization, Rector Ríos founded Pedro de Valdivia University, achieving his aim of establishing a system of comprehensive education and creating educational opportunities for a broad cross-section of the population. Today, over 60,000 students take advantage of the various levels of studies offered.

In the citation, Rector Maulén Ríos stated that for a developing country like Chile, education carries great weight in ensuring social reforms for a better future for its children. He commended Mr. and Mrs. Ikeda for their contributions to advancing democratic values and humanistic education in which the university exists not merely to train qualified doctors and lawyers, but to teach students to gain skills for winning in the face of life’s adversities--ideals by which Pedro de Valdivia University also abides. As a young university, Rector Maulén Ríos said, the institution takes pride in honoring Mr. and Mrs. Ikeda with its first two honorary doctorates in recognition of their lifelong contributions to peace and education. He expressed his hope that this would mark a milestone toward strengthening exchanges between Soka University and Pedro de Valdivia, as well as toward cooperation and goodwill between Chile and Japan.

In his acceptance message read by proxy, Mr. Ikeda expressed his heartfelt appreciation for the honorary professorships and his joy in sharing the accolades with members of SGI-Chile. Reflecting on the message he received from former Chilean president Aylwin Azócar, Mr. Ikeda paid tribute to Chile for being among the first to declare itself a nonnuclear weapon state (through the Treaty of Tlatelolco). He also praised Rector Maulén Ríos for standing up to Chile's military regime as a youth and upholding his conviction in democratic values through nonviolent resistance, despite being incarcerated at age 30. In closing, Mr. Ikeda stressed that the wisdom and power for overcoming the pressing global issues facing humanity lies within the lives of each individual, especially youth. Further, he expressed his firm commitment to working with Pedro de Valdivia to ensure that education, which he considers the eternal “light of peace,” continues its ascent like the sun over the Pacific.

[Adapted from an article in the September 9, 2010, issue of the Seikyo Shimbun, Soka Gakkai, Japan]