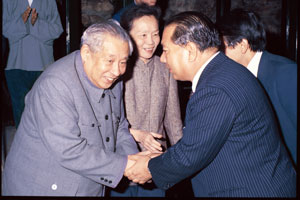 The first work was compiled by Vice Chancellor Gao Yuelun, director of the Liao Chengzhi and Daisaku Ikeda Research Center at Zhongkai University of Agriculture and Engineering (ZUAE) in Guangzhou, Guangdong. Liao (1908-1983) was known as a key member of Premier Zhou Enlai's foreign policy think tank and served as the first chairman of the China-Japan Friendship Association; he played an instrumental role in Mr. Ikeda's first trip to China in May 1974 and in his meeting with Premier Zhou later that year.

One of the more recent institutes in China to focus on Ikeda's philosophy, ZUAE's Liao-Ikeda Center, was dedicated in November 2010. Following the lead of Beijing University, by 2008, more than 20 centers and societies studying Mr. Ikeda's humanistic thinking and ideas had been established in China alone. There are other such organizations in both Taiwan and Hong Kong.

An example of such a center in Taiwan is the Daisaku Ikeda Research Center of the Chinese Culture University (CCU) in Taipei, which was opened in 2003 and sponsored the fifth Daisaku Ikeda Peace Ideals Research Forum, with some 400 researchers and students from six universities taking part in March 2011. In October 2009, Liaoning Normal University in Dalian, China, hosted the Fifth International Symposium on Daisaku Ikeda's Ideals, featuring 65 papers submitted by scholars from 48 universities and nine institutes, the majority of which are based in Hong Kong, Taiwan and mainland China. Liaoning Normal University President Qu Qingbao also heads the university's Daisaku Ikeda Peace and Culture Research Institute.

At the aforementioned forum held in Taipei, Dr. Chang Jen-Hu, chair of CCU's Board of Directors, commended two of Mr. Ikeda's dialogues--Choose Life with British historian Arnold J. Toynbee, and Moral Lessons of the Twentieth Century with former Soviet leader Mikhail Gorbachev, both of which have been translated into Chinese--for the invaluable lessons they impart. Against the background of Mr. Ikeda's 1968 call for normalization of diplomatic ties between China and Japan, others, such as He Yun'an, vice secretary of Southwest Jiaotong University, have lauded Mr. Ikeda as someone who has been foundational in the formation of bilateral goodwill through the promotion of cultural exchanges between the two countries. He further noted that the impact of Mr. Ikeda's legacy on Chinese society is evident by the numerous institutes dedicated to the study of his philosophy in China today.