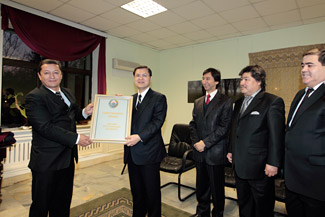 On December 14, 2011, Termez State University in Tashkent, Uzbekistan, presented Daisaku Ikeda, SGI president, with an honorary doctorate in recognition of his contributions to the flourishing of Uzbek-Japanese friendship and the advancement of historical and archeological research. The conferral took place at the Tashkent House of Photography in the Uzbek capital of Tashkent, attended by an SGI delegation led by SGI Vice President Hiromasa Ikeda. Termez State University Vice Rector Gadayshaev Mahmood entrusted the certificate to Vice President Ikeda, who accepted it on his father's behalf.

In his remarks prepared for the occasion, Mr. Ikeda referred to the words of Termez's founder Hakim-e-Termezi, who declared that embracing the light of education emits a brilliance from deep within one's own heart. Affirming that Termez State University has succeeded this great humanistic legacy, Mr. Ikeda said he accepted the honor bestowed upon him with deep pride and a solemn sense of responsibility, vowing to continue to exert himself toward the development of education for the sake of youth, humanity and peace.

[Adapted from an article in the December 19, 2011, issue of the Seikyo Shimbun, Soka Gakkai, Japan]