Songs from My Heart Published in Mongolia 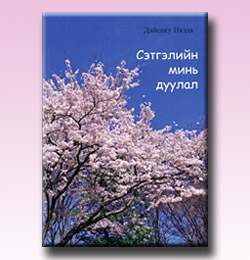 Mongolian edition of Songs from My Heart

ULAANBAATAR, Mongolia: The Mongolian Academy of Culture and Poetry has published a Mongolian edition of Songs from My Heart, a selection of Daisaku Ikeda's personal journals of his travels and experiences recorded in poetry and photographs. The work expresses his impressions and reflections of intimate hopes for the future, of nature's message of strength and beauty, of people--particularly young people--he has met along his journeys.

In the preface to the Mongolian edition, Mr. Gombojavyn Mend-Ooyo, president of the Mongolian Academy of Culture and Poetry, himself an acclaimed poet, describes Songs from My Heart as "a message from the soul" and a testament to the capacity of literature to inspire courage and strength in people.

In April 2008, the Mongolian Academy presented Mr. Ikeda with its first Tengeriin Hureg (Celestial Horse) award for his contributions to literature and poetry.

Songs from My Heart was originally published in Japanese in 1976 and translated into English by Burton Watson in 1978. The work is also available in Japanese, Thai, Portuguese, Tagalog and French.

[Adapted from an article in the December 22, 2011, issue of the Seikyo Shimbun, Soka Gakkai, Japan]