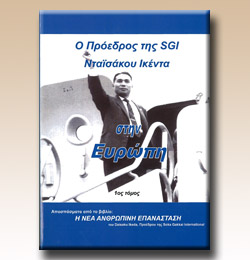 ATHENS, Greece: SGI-Greece has published a Greek edition of The New Human Revolution. The work is a historical novel detailing the international development of the Soka Gakkai lay Buddhist organization under the leadership of its third president, Daisaku Ikeda, who appears in the novel as Shinichi Yamamoto. An ongoing series, The New Human Revolution recounts the experiences of pioneering members of the Soka Gakkai International (SGI) who, through utilizing their Buddhist practice, were able to bring forth their inherent inner potential and strength to overcome countless personal struggles. The author terms this "human revolution," a process which not only dramatically empowers the life of the individual, but has a significant impact on the betterment of one's family, community and is the basis for the creation of world peace.

This latest Greek edition combines Volumes 4 to 7 of the series and details Shinichi Yamamoto's interactions with SGI members in Europe and his visit to Greece in 1962.

Including the Greek edition, the original Japanese novel has now been translated into 13 languages including English, Portuguese, Dutch, French, Indonesian, Thai and Tagalog.

[Adapted from articles in the July 8 and December 23, 2011, issue of the Seikyo Shimbun, Soka Gakkai, Japan]