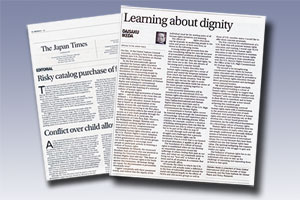 "Learning About Dignity," an essay by Daisaku Ikeda, was carried in the December 23, 2011, issue of The Japan Times, one of Japan's largest English language dailies.

In it, Mr. Ikeda highlights the new U.N. Declaration on Human Rights Education and Training adopted by the United Nations General Assembly on December 19, 2011, which "provides an important foundation for empowering people by raising awareness of all human rights including the rights set out and guaranteed in the 1948 Universal Declaration of Human Rights." While Mr. Ikeda believes the document will serve as a springboard for building a universal culture of human rights, he also believes that teaching people about the dignity of the individual must be the starting point.

In the essay, three concrete proposals are offered to strengthen the charge of the declaration, as follows: (1) Establishing a U.N. body that promotes human rights education and training. (2) Strengthening coordinated regional efforts for human rights education with a special focus on youth. (3) Promoting interfaith dialogue toward building a culture of human rights.

[Link to the essay "Learning About Dignity"]